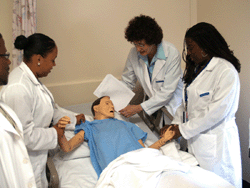 What if, in the interest of controlling costs, the government set the level of wages that all health care workers throughout the country could earn? And what if, in the interest of promoting the goal of eliminating income inequality, they set them to be fairly uniform throughout the nation, so that a nurse in a poor part of the country would make as much as money as a nurse in a more well-to-do region?

It sounds wonderful, doesn't it? And what could be more fair from a social justice standpoint? Health care workers would earn the exactly the same money for doing the same jobs no matter where they do them. Better yet, the enlightened individuals who run the government would reap the rewards from achieving their goals of social justice and equality, all while keeping the cost of government-funded health care well under control!

And it would be pretty nice, if only it didn't end up killing people by denying them access to high quality health care. As it happens, it would seem the trade-off for achieving income equality in health care is a significant decrease in the quality of health care that might otherwise be available.

We know that's the case thanks to a recent study published in the Journal of Political Economy by Carol Propper and John Van Reenen: "Can Pay Regulation Kill? Panel Data Evidence on the Effect of Labor Markets on Hospital Performance":

In many sectors, pay is regulated to be equal across heterogeneous geographical labor markets. When the competitive outside wage is higher than the regulated wage, there are likely to be falls in quality. We exploit panel data from the population of English hospitals in which regulated pay for nurses is essentially flat across the country. Higher outside wages significantly worsen hospital quality as measured by hospital deaths for emergency heart attacks. A 10 percent increase in the outside wage is associated with a 7 percent increase in death rates. Furthermore, the regulation increases aggregate death rates in the public health care system.

The authors looked at the government-run National Health Service in the United Kingdom, which actually has implemented the scheme. Here's a quick summary of their major findings:

The U.K.'s National Health Service (NHS), which is responsible for most of the nation's health care, sets wages for nurses and other health professionals on a national scale. These regulated wages are essentially flat throughout the country, despite the fact that wages for private sector jobs vary widely from region to region. The study finds that in places where private sector wages are higher, death rates for heart attack victims admitted to emergency departments are higher.

The finding suggests that in places where private sector pay is better, it is difficult for NHS hospitals "to attract and retain skilled workers and this will lead to lower quality service," write the study's authors, Carol Propper of the University of Bristol and John Van Reenen of the Centre for Economic Performance at the London School of Economics.

The research suggests that the most skilled nurses in high-wage areas flee the NHS hospitals to work in health sectors where wages are not regulated, such as nursing homes. Productivity levels in nursing homes are significantly better in areas where private sector wages are higher, the study found.

In a nutshell, the reason why regulating wages to achieve income equality for health care workers results in worse health care outcomes is that the most highly talented and skilled people who might otherwise choose to go to work in hospitals and clinics funded by the government are instead attracted to other, higher paying occupations that are not subject to the government's arbitrary regulations.

After all, why shouldn't these highly capable individuals seek incomes that better match their relative level of quality performance? Especially when being better at providing health care than your lower-performing peers isn't adequately compensated.

This is especially true in those well-to-do areas where there are many other opportunities that might attract these high achievers, with many talented young people bypassing the medical field for other, more rewarding professions altogether.

"Publicly run healthcare markets would be wise to relax the regulatory systems and allow local wages to reflect local conditions as they do in the private sector," the researchers conclude. "According to our analysis such deregulation would lead to higher quality public services and fewer deaths."

"As the U.S. government becomes more involved in healthcare, this is a lesson worth heeding," Van Reenen said.