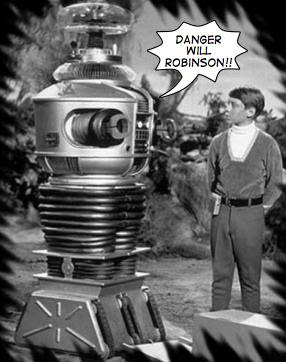 Okay, maybe not that robot, or its human counterparts, who might often have their dials wound a bit too tightly, but what about a quick checklist you can use to see for yourself if things really are going to an economic hell in a handbasket?

That's our goal for today. Let's get started.

Ashlee Simpson may think that love makes the world go round, but believe us when we say that all its gears are greased by oil! Everything from the shipping and transportation that connects the world to you and you to the world through trade and then on to a myriad of commercial products that rely upon petroleum and its byproducts for their existence is affected by oil, so when the demand for oil falls off, it's good indication that bad things are unwinding in the economy.

It's an old joke, and yes, a bad one, but what it's really getting at is the idea that rapidly changing prices are a bad thing, regardless of their direction. Let's use oil as a case in point. Here, in the case of inflation, you can have rising prices being driven by rising demand (a good thing, right?) but if its price rises too high too quickly, it can trigger a reaction that will cause the demand for oil to drop off, as people get freaked out by how expensive it's becoming and change their consumption habits to adapt. On the deflation side, you can have rapidly falling prices, which more often than not correlate to falling demand for oil, which we've already established is a bad sign.

Of the two, deflation is worse than inflation. If you think about it, if prices are plummeting and the reason why isn't because the people who make things have become much more productive at what they're doing, that's almost always an indication of some kind of market crash, which is normally not considered to be what Martha Stewart would call a good thing. We could be talking about stocks, houses, oil, cars, wombats, you name it, if the demand for stuff is falling, it's not good for the people who depend upon it for their livelihoods. And if it goes on long enough, the pain will spread to reach you....

Of course, we know that money is at the root of all evil. Truth be told however, it's just a symptom. What makes it useful, aside from making it easier to buy stuff, is that it can tell us when things are going bad by how it acts.

For instance, the people who actually create money might go crazy and set their printing presses on overdrive. In this case, because they end up making way more money than there's stuff to go around, it makes the value of money drop in comparison (we'll call that "inflation"), which we've already determined to be a bad thing. Or they might just accidentally lock themselves out from the room with the printing presses and not make anywhere near enough money, sending the relative value it with respect to stuff skyrocketing, which makes all other prices fall rapidly in comparison, which is also a bad thing, in this case, called "deflation."

That covers the rapidly changing prices scenario, but money can tell us more than that. In reality, because it's pretty unusual for the printing press operators at the Treasury department to lose their grip on reality or the keys to the building, we don't necessarily get super clear signs like that to tell us that the economy is going wrong.

So, we should look for other kinds of money troubles. Things like sharply increasing debt levels or defaults and bankruptcies or foreclosures. Things like high unemployment and underemployment levels. And we should also look out for money going to places it likes to hang out when times are expected to get tough. Like long term government treasuries.

That last one creates a unique way to gauge whether times will get tough. When times are good, it's pretty common for the yields on short term treasuries to be a lot lower than for long term ones, which is what you'd expect since an investor in a treasury should demand a higher return for locking their money up for a longer period of time.

But when times get tough, money likes to take a long-term holiday until the smoke clears. When that happens, the short term yields of treasuries rise and the long term yields fall, resulting in rates becoming flatter regardless of time, or even inverting, which is what happens when long term rates drop below the level of short term ones.

The key measure here is called the treasury yield spread, which is the difference between long term treasury rates and short term ones. The early warning sign here is that when it becomes smaller, the economic situation is becoming worse. And the smaller it gets, the more danger there is in the economy. Fortunately, there are tools you can use that can help you find out not just if times are already tough, but if they're likely to get tough.

So that's your quick and dirty three point guide to telling if the economy is going south. And now that you know what to look for now, just how many of these things do you see in your economy today?