Political Calculations
Unexpectedly Intriguing!
May 19, 2010
Triangulating the Deadweight Loss of Cash for Clunkers

How much deadweight loss did the government's "Cash for Clunkers" program generate in the U.S. economy during the five weeks it ran in 2009?

How about we build a tool and find out! 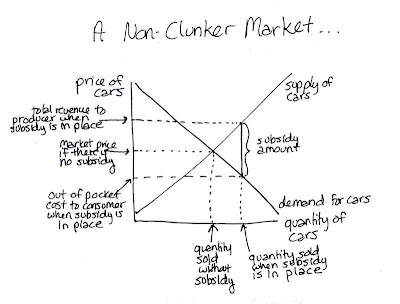 We'll begin by taking a closer look at the supply and demand curve for vehicles in the United States. Specifically the one that Jodi Beggs of Economists Do It With Models sketched up to consider what the potential deadweight loss for the Cash for Clunkers program might be.

We next tweaked the diagram to highlight the area representing the deadweight loss to the U.S. economy on Jodi's supply and demand diagram, shading it in yellow.

The rest of our exercise will be to simply identify the values of each of the indicated components, which we'll then use as the input data for the tool that appears below. 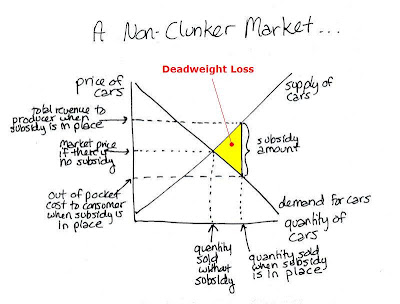 To get that data, we turned to Edmunds.com. They report that the average market price of a new vehicle in the United States before the Cash for Clunkers subsidy went into effect, was $30,998.

They also report that the average price of a vehicle sold in the United States during the five weeks the Cash for Clunkers program ran was $26,915, less an average rebate of $1,667. That then sets the average out-of-pocket cost to the consumer to be $25,248.

The real question though is how many new vehicle sales, above and beyond those that would have happened anyway, took place during those five weeks. Edmunds pegged that figure to be 125,000, substantially less than the 690,000 vehicles for which U.S. taxpayers subsidized their purchase. This amount would need to added to the quantity sold without subsidy to represent the quantity sold when the subsidy is in place.

After all, if 565,000 of the 690,000 vehicles transactions that benefited from the Cash for Clunkers subsidy would have occurred anyway, then the 125,000 additional vehicle transactions that occurred would fully represent all the net gain in economic activity resulting from this particular economic stimulus program.

Dividing that 125,000 vehicles into the $6.9 billion U.S. dollars the program cost U.S. taxpayers then reveals that each one of these additional transactions put roughly an additional $24,000 in the pockets of the auto industry for each vehicle sold, with Japanese automaker Toyota being the number one beneficiary of the U.S. taxpayer financed program. Bankrupt U.S. automaker General Motors was the second biggest beneficiary, despite having none of its models listed in the top ten vehicles purchased in the subsidy program.

Adding that $24,000 per additional vehicle sold to the out-of-pocket cost paid by the consumer with the subsidy then gives us the last piece of data we need to estimate the deadweight loss of the Cash for Clunkers program. We find the total revenue to the producer when the subsidy is in place is $49,248.

The rest is just a matter of finding the area of the triangle representing the deadweight loss on the supply and demand diagram! And that's why we have a tool with the default data for the point coordinates of the triangle already plugged in, ready for you to use below. For the purpose of our analysis, since we're only interested in the change from the equilibrium "no subsidy" levels of supply and demand, we're entering 0 as the quantity sold without subsidy.

We'll have more comments below the tool....

We estimate that the deadweight loss to the U.S. economy and taxpayers resulting from the government's "Cash for Clunkers" program to be $1.5 billion dollars.

The more we look at this "deal", the worse and worse it gets....

On the plus side, our tool above may be adapted to find the area of any triangle, provided you can identify the coordinates of its points. So at least there's something positive that's now come out of the government's Cash for Clunkers program!

We asked and answered the question of "How Green Is Cash for Clunkers?", where we took on the program's purported environmental benefits, and also asked "Will Cash for Clunkers Save Gas?", doing the analysis to see if Americans would really use less gas if they had more fuel efficient cars.