Having established that a new trend in employee layoffs began between 14 November 2009 and 21 November 2009, we've modified the statistical chart we originally presented yesterday to show its full extent. 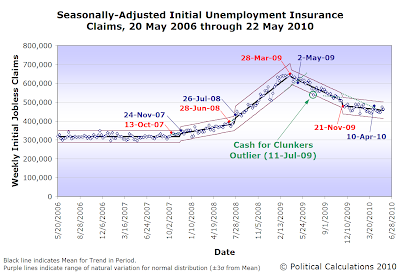 In doing that, we also recalculated the typical range of natural variation we would expect to see for the previous trend, and in doing so, found an anomaly. The data for 11 July 2009 falls outside that range, which is defined as being within three standard deviations of the mean linear trend line for the data defining the trend.

We recognize this point as an outlier in the data for the trend that existed between 28 March 2009 and 14 November 2009, in that the following data points quickly returned to follow the primary trend line. But we also recognize that there must be a specific cause for such a deviation from the trend.

As it happens, the only economic factor that could have impacted the decision of businesses for retaining employees that occurred at this time is the government's Car Allowance Rebate System (CARS, aka "Cash for Clunkers") stimulus program.

As we noted yesterday, changes in established trends for seasonally adjusted initial unemployment claim filings typically lag two to three weeks behind the events that change the future economic outlook for businesses. With the Cash for Clunkers program signed into law on 24 June 2009 and taking effect on 1 July 2009, we find no other coinciding events that would potentially affect business staffing decisions on a large scale. The program ran through 24 August 2009.

The data indicates that the Cash for Clunkers program did not significantly alter the established trend in layoffs during this period, which was declining in any case.

Which brings us to the present. We were incorrect in stating yesterday that Geoff of Innocent Bystanders hadn't identified a potential cause driving the current trend in U.S. layoffs. He did, finding that the introduction of health care legislation in the House of Representatives on 29 October 2009 was the likely cause of the deviation from the previously established trend, fully beating us to an analysis-based conclusion that was the likely cause by two weeks! And then, he first speculated that might the case back on 15 April 2010, long before we began putting the pieces together ourselves.