Suddenly, last Thursday, we discovered that we could see six months farther into the future!

What happened is that our preferred source for dividends future data finally began showing the expected level of dividend payments to be made between now and when the S&P 500 index futures contract for the second quarter of 2011 expires in June 2011. 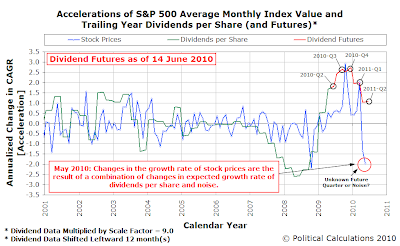 Finally able to see past the end of 2010, the chart to the right shows what we found: the growth rate of the S&P 500's dividend per share is expected to begin decelerating through the first half of next year.

We suspect that this deceleration, combined with the noise generated by the recent series of crises in the European bond market, is largely responsible for the recent declines in U.S. stock prices.

The additional data now allows us to better quantify how much of the market's recent decline is the result of the noise we see emanating from Europe versus how much is being driven by changes in the fundamental outlook for the companies that make up the S&P 500. In our chart, the effect of noise would be measured by the vertical difference between the expected change in the growth rate of dividends per share in June 2011 from the observed change in the growth rate of stock prices, through May 2010.

As a result, we're updating our previous forecast for the S&P 500 in June 2010. Given the futures data available for 14 June 2010 and assuming the approximate level of noise we've been observing in the last two months, we would expect the average of stock prices for the S&P 500 to fall in a range between 1074 and 1118 during this month. Our assumptions continue to be driven by the idea that the noise we observe in the market will continue until it stops, and as long as it appears to be stable, we can continue to treat that noise as if it were being driven by a fundamental change in the future outlook of investors.

Without the negative effect of Europe's debt-driven crises upon the U.S. stock market, and assuming a more typical level of noise in the market, we would instead expect to see stock prices in June 2010 range between 1212 and 1257.

There is one caveat to our assumptions. Since we now can't see past June 2011, which is just 12 months away, it is possible that investors are looking even farther forward to a point in time beyond that point, to a future quarter where we do not yet have dividend futures data. Given how stock prices are behaving, it could well be that investors are expecting changes in the the growth rate of the market's dividends per share to decline more sharply than the data we do have available now indicates.

So it's quite possible that there's less noise than would seem to be present in the market today, and that the decline in stock prices we've seen in the last two months is being driven by a worsening fundamental outlook for U.S. businesses in 2011.

We'll be able to tell if that's the case once we have dividend futures data available through December 2011.