Can we draw a single graph that captures exactly what investors have been seeing since the middle of last year when they look ahead at the prospects for the U.S. economy?

Our chart below shows how the S&P 500's trailing year dividends per share have been projected to change into the future since 14 July 2009 for each quarter where we have dividend futures data available: 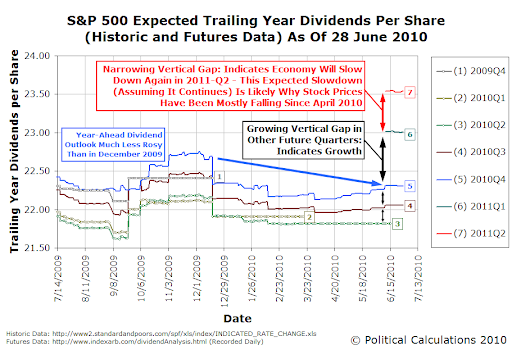 In addition to our comments presented on the chart, we'll also note that the growth in expected cash dividend payouts between the fourth quarter of 2010 and the first quarter of 2011 is unusually strong.

That result may be an artifact of the time frame for which the stock index futures contracts apply. Here, for any given quarter, these futures run through the end of the third week of the month in which the quarter ends.

So, for example, the futures contract that applies for the fourth quarter of 2010 will expire on 17 December 2010. Any cash dividends that are expected to be paid out to investors from that date forward through the end of the contract covering the first quarter of 2011 includes dividend payments being made during the final weeks of December 2010.

That's significant this year since taxes on income received through dividend payments are scheduled to increase dramatically for any such income earned after 31 December 2010. Companies and investors may be acting to load up their dividend payments in 2010 to avoid having to pay higher taxes on that kind of income in 2011.

A more normal seasonal pattern would be for the quarterly payout of cash dividends to peak in the fourth quarter of a given tax year. That the first quarter of 2011 is set to have such a jump in dividend payouts is an indication that something unusual is at work.

It also explains why we have such a discrepancy between what the dividend futures data indicates will be the level of trailing year dividends per share at the end of 2010 with what Standard & Poor indicates.

Here, Howard Silverblatt projects (via the spreadsheet for S&P 500 Earnings and Estimates provided under the Monthly Performance Data section of S&P's Market Attributes page) that trailing year dividends per share for the S&P 500 at the end of calendar year 2010 will be $23.67. By contrast, the December 2010 dividend futures contract that only covers the period through 17 December 2010 indicates that the trailing year figure for 2010 will be $22.32 per share.

That difference suggests that a lot of dividend payments are going to get crammed into the last two weeks of 2010 as investors play the grown-up version of "Beat the Clock."