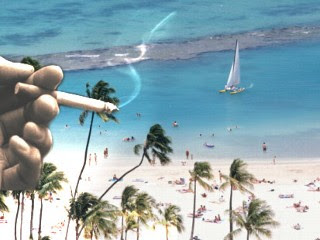 For some crazy reason, we thought it might be fun to take a look at the recent history of cigarette taxes in Hawaii and do some back-of-the-envelope analysis.

Why, you ask? Well, unlike other states, when Hawaii raises its cigarette taxes, neither Hawaiian smokers nor smugglers can just hop in their cars and go across state lines to where they might find cheaper cigarettes to buy legally and sneak back into the state. Surrounded by thousands of miles of ocean, it takes a lot more effort to make bootlegging cigarettes a profitable enterprise in Hawaii! 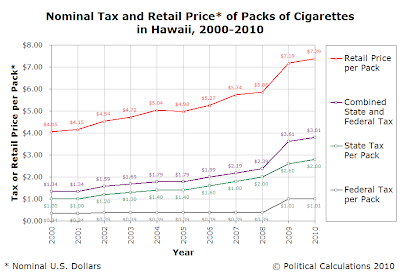 And that means that Hawaii represents a good test case for seeing how cigarette taxes affect the quantity of cigarettes demanded by smokers! Let's start by looking at how the average retail prices of a pack of cigarettes, as well as the federal and state excise taxes per pack of cigarettes, has changed in Hawaii from 2000 through 2010, which we've presented in the chart to the left.

What we see is that the average retail price of a pack of cigarettes in Hawaii has increased from $4.05 in 2000 to $7.39 in 2010. By and large, what we observe is that the price of cigarettes largely changes in conjunction with increases in the state and federal excise taxes on tobacco, as these have increased from a combined level of $1.34 per pack in 2000 to $3.81 per pack in 2010. 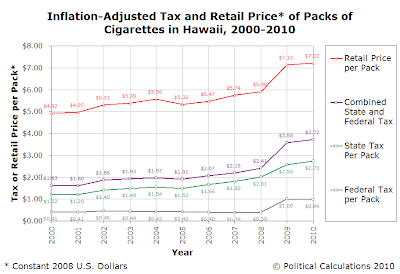 Next, we'll adjust all these figures to account for the effect of inflation over time. Our next chart presents the same data in terms of inflation-adjusted 2008 dollars.

Looking at the difference between these figures, the average retail price grew by an inflation-adjusted $2.30 per pack, while taxes increased by $2.09 per pack, indicating that the increases in the amount of state and federal excise taxes on tobacco are responsible for 90.9% of the increase in the price of a pack of cigarettes in Hawaii. 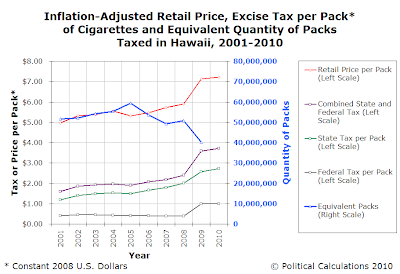 Since we're interested in how the changes in the level of state and federal excise taxes on tobacco products have affected the quantity demanded over time, we next estimated the quantity of packs of cigarettes legally sold in Hawaii for the years from 2001 through 2009.

With 2001 marking the last year that the federal and state excise tax combined at the low level of $1.34 per pack (in nominal terms) and 2009 marking the most recent year for which we have Hawaii's tobacco tax collection data, we estimated the equivalent quantity of packs of cigarettes sold in Hawaii by dividing each year's total tax collections by the state's cigarette tax per pack. We've presented those results in the chart on the left.

What we see is that at first, as taxes rose, in Hawaii, so did the number of packs of cigarettes purchased legally. Since this occurred in the years from 2001 through 2005, we believe this result indicates that the relatively low level of tax increases in these years, combined with a growing economy providing increasing incomes, allowed smokers to purchase an increased number of packs of cigarettes through this period.

But beginning in 2005, higher taxes made packs of cigarettes relatively more expensive for Hawaiian smokers, who reacted by cutting back on their consumption.

That continued until the transition from 2008 to 2009, when both Hawaii and the U.S. government sharply increased their excise taxes on tobacco products. These higher taxes, combined with the income-reducing outcomes of the U.S. recession which began in December 2007, combined to dramatically lower the amount of packs of cigarettes consumed in Hawaii.

This latter observation suggests that the tipping point in cigarette taxes may have been reached in Hawaii. By that, we mean that each percentage increase in the inflation-adjusted price of cigarettes above their 2009 level will result in a greater percentage decline in the quantity of cigarettes sold.

That result suggests then that both Hawaii and the federal government have little to gain in terms of their tax collections from Hawaiian smokers by increasing cigarette taxes at a rate faster than inflation. Which means that if these governments are counting on having higher taxes on tobacco products for funding their spending programs, they can instead count on being out of luck. 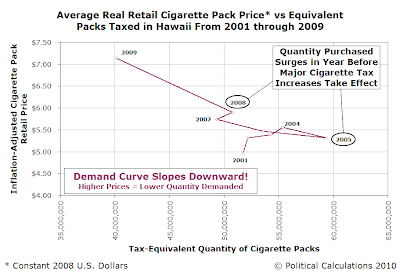 Instead, elected officials and bureaucrats in Hawaii can count upon ever-greater tax avoidance behavior on the part of cigarette smokers in the island state. And in fact, when we plot the inflation-adjusted retail price of packs of cigarettes sold in Hawaii against their quantity, we already observe that behavior.

What we see is that Hawaiian tobacco consumers are pulling ahead their purchases of tobacco in advance of cigarette tax increases. We see this rather dramatically in 2005, the last year in which no cigarette tax increase took place in Hawaii that coincides with a strongly growing state economy, and again in 2008, where even though the economy had entered into recession, Hawaiian smokers acted to beat the tax increases that were certain to be coming in 2009.

Which means that where the tax collections that state officials were counting on to cover their spending in 2006 and 2009 likely fell far short of what they expected. That's quite a lot of deadweight loss if you think about it, with more guaranteed to occur when they try to increase taxes again to cover their unexpected deficits. And with taxes already set so high, they just won't be able to get the taxes out of Hawaii's smokers that they're hoping to get!