Since April 2010, U.S. stock prices have been signaling investors' expectations that the U.S. economy will enter into a period of contraction at some time in 2011, most likely in the latter half of that year. Today, we'll take a look at the much closer future in taking a look at where U.S. GDP can be expected to fall for the just-finished second quarter of 2010, which will help provide a better sense of the contrast between the economic situation Americans are experiencing today with what they anticipate for the future. 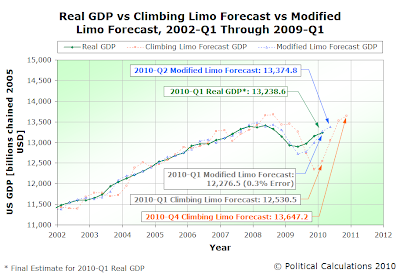 To do that, we'll be taking advantage of the recently finalized GDP data for the first quarter of 2010, along with our Modified Limo GDP forecasting technique.

For the first quarter of 2010, that technique came within 0.3% of perfectly anticipating the level of GDP, with a predicted GDP level of $13,276.5 billion versus the finalized figure of $13,238.6 billion. Both values are adjusted for inflation and are given in terms of constant 2005 U.S. dollars.

Our forecast GDP would have to be within 2.0% of the recorded final value of GDP for a given quarter to be considered to be a correct prediction.

Although we don't normally report GDP growth rates, given their extreme sensitivity to small changes in recorded quarterly GDP levels, the target value of $13,374.8 billion would represent an annualized growth rate of 4.2% for the second quarter of 2010.

For evidence supporting that optimistic outlook, we would point you to Mark Perry's posts for April, May and June 2010, as they document much of the positive nature of the economic data that has been recorded throughout the quarter.

It is unlikely however that this solid economic performance will significantly boost employment levels or stock prices anytime soon, as both these economic measures are largely affected by future expectations for the U.S. economy, which remains negative.

Or as they say, "past performance may not be indicative of future results."