Did you ever wonder how well the White House's Office of Management and Budget and the Congressional Budget Office are at forecasting where the U.S. budget deficit will go? 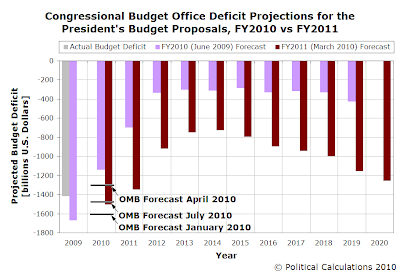 The reason we're asking that question today is because the OMB has once again estimated just how much in the red the Obama administration's spending will put the U.S. in 2010: 1.471 trillion U.S. dollars.

Meanwhile, we see that the OMB's third figure on the year is almost right on target with the $1.5 trillion deficit the Congressional Budget Office projected just once, back in March 2010.

If only "Recovery Summer" went as the Obama administration's finest and most brilliant budgetary and economic minds predicted it would!