Political Calculations
Unexpectedly Intriguing!
August 23, 2010
Which States Expected and Got the Worst? 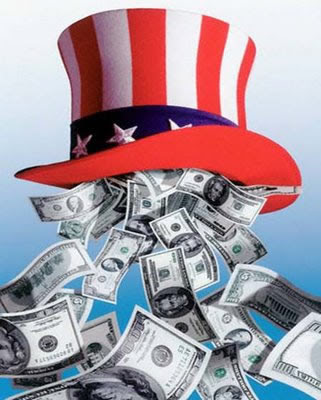 If you ran a state government, what would you do to be prepared for a major economic downturn in your state?

Believe it or not, most politicians and bureaucrats don't live in a total vacuum, despite recent evidence to the contrary. If they know that trouble lies ahead, they prepare for it.

Of course, that's mainly due to self-interest. Having risen to positions of power, many seek to continue in their positions for as long as possible. And part of that means having to cope with the downside to any less-than-desirable economic policies they may have when the economy can no longer support their follies.

For instance, the one thing that most threatens the ability of those in power to remain in power is whether the people who can vote them out of office have recently lost their jobs. If times are bad, and a politician or bureaucrat wishes to continue pursuing their wasteful or economically destructive policies to support their own personal gravy train, whether driven by ideological or corruption-based motives, then they have to compensate in such a way that makes it possible for them to survive the downturn.

The traditional solution that our power-hungry, ideologically-motivated and corruption-driven politicians and bureaucrats have come up with to deal with that problem often comes in three parts (stop us if it sounds all too familiar....):

To pay for providing those jobless benefits, governments use Unemployment Insurance (UI) taxes. Here, businesses are required to pay a percentage of an employee's income to cover the cost of providing unemployment benefits, with the tax rate varying by occupation - employers in highly cyclical industries can expect to have to pay more than employers in less volatile industries, for example. In the United States, these taxes are applied at the state level.

It occurs to us that we can use average UI tax rates to get a sense of which states' politicians and bureaucrats expected that the conditions they created for economic growth in their states were such that they would have to deal with the consequences of significantly higher unemployment thanks to their insider knowledge of the likely effects of their economic policies.

Here, we would expect a state whose politicians and bureaucrats recognize that they've systematically disadvantaged themselves economically will very consciously set average unemployment insurance tax rates higher than they would otherwise so they can support higher levels of joblessness or higher levels of jobless benefits. Here, what they would set otherwise would be determined by the level of unemployment insurance benefits they would expect to pay out to support the kind of cyclical variations that would really be expected for their state's mix of jobs.

After all, if they really believed that their policies really promoted positive economic growth and job creation, they wouldn't need to set unemployment insurance taxes much higher than that level. Unless they know something to the contrary.

The chart below shows what we found when we looked at the most recent data for average unemployment insurance tax rates from 2009. We've made the interactive version of the map we generated, along with our dataset, publicly available through IBM's ManyEyes data visualization site: 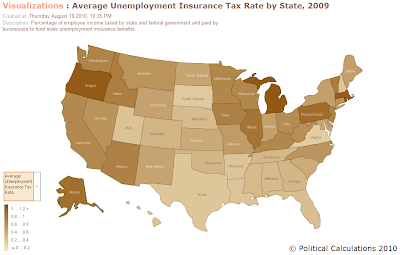 As it happens, another ManyEyes user, crampell, created a map showing the seasonally-adjusted rate of unemployment for each state as of July 2009: 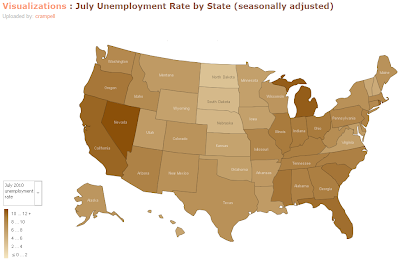 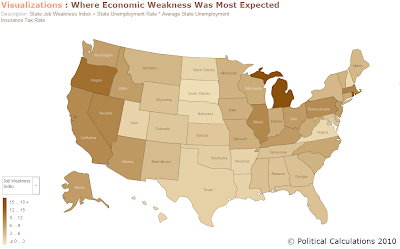 We find that Michigan, Rhode Island and Oregon round out the top three states where politicians most expected to have to deal with the high unemployment rates they eventually realized due to their poor economic policies.

The important thing to realize here is that these states UI tax rates were not set overnight - in most cases, they were set in place years ahead of when the unemployment they would be supporting arrived, confirming that the politicians in these three states were well aware of their relative economic weakness.

That they were also telegraphing that their economic policies would be unlikely to promote the kind of job growth it would take to genuinely turn their states economic situations around years in advance appears to have escaped their attention....