Seasonally-adjusted first time jobless claims were announced on 2 September 2010 to be 472,000. Which was down some 6,000 from the previous week's revised total of new initial unemployment insurance claims of 478,000, which itself was down from the 504,000 filings of two weeks ago.

You might think those numbers represent a positive trend, as it would seem that the number of people filing unemployment insurance claims for the first time after having been laid off from their jobs seems to be falling. You would be wrong. 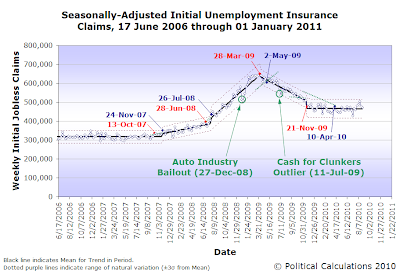 We find that's the case when we look at the overall trend in first time jobless claims since 21 November 2009, when the current trend was first established. What we find is that overall the overall trend in the number of initial unemployment insurance claims filed each week is flattening out, and has nearly become flat.

The problem is that the number of new unemployment claims is becoming flat at a level far higher than the average 318,000 level that was typical during the full-employment, low-unemployment years of 2006 and 2007. Instead, we find the level of new jobless claims would appear to be stabilizing around a level of 465,000 weekly claims, some 147,000 claims higher than would be consistent with a growing U.S. economy.

Using the standard deviation of the data for initial unemployment insurance claims filed since 21 November 2009, and assuming a normal bell-curve type distribution, we can now reasonably expect new weekly jobless claims filings will range between 415,000 and 515,000. A data figure falling outside of this range would be unexpected.

At least, until something happens to break the current trend, must as the introduction of health care reform legislation did to change the trend for the employee retention decisions of U.S. businesses back in November 2009. Prior to the introduction of the HR 3962 bill, the situation for new jobless claims was actually improving at a rapid rate, but the strong likelihood that health care reform that would impose higher costs on businesses would pass into law derailed it.

We had thought as recently as two weeks ago that a new negative trend might be in the process of being established, however the data of the last two weeks suggests that the current trend remains in effect, as the rules we follow for determining when an existing trend is broken weren't tripped.