At the beginning of August 2010, we used our model of the S&P 500 to make three predictions of where stock prices would go during the month. We predicted: 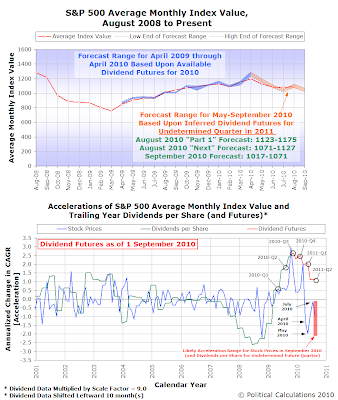 For September 2010, we're once again inferring from stock prices that investors expect that the stock market will return lower dividends in the future, which for stock prices in September mainly means flat-to-lower stock prices. Our model would place the likely range for the average of the S&P 500's daily closing stock prices during the month to be between 1017 and 1071.

We're not going to offer a "where stock prices would go next" forecast since it's not much different (that forecast, tentatively labeled as "October" in our notes is slightly lower.)

We're also coming up on when companies will be most likely to be revising their forward-looking guidance for the end of the year and when we should start getting dividend futures data extending into September 2011.

Speaking of which, S&P's Howard Silverblatt has picked up on a change in momentum where stock market earnings are concerned, which he currently has noted in the S&P 500 Monthly Performance Data (free, registration required) in the S&P 500 Earnings and Estimates spreadsheet:

Second half economic reports and corporate guidance pointing to a slowdown; top-down still pessimistic, with bottom-up slightly down over the last week

No Sales Means No Jobs Means No Recovery http://tinyurl.com/347zy98

And on that cheery note, we'll borrow a line from Captain Capitalism and say "enjoy the decline!" We're really not that pessimistic (and honestly, only Captain Capitalism could be), but as long as we're there, we figure we might as well go all out!