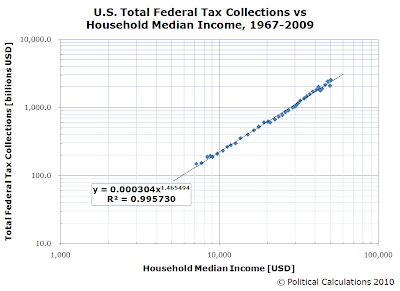 Our chart reveals the correlation. Here, we've shown the amount of total federal tax collections against U.S. household median income since 1967 on a log-log graph.

The results are stunning - the coefficient of determination between these two variables is 0.9957, just a bit shy of a perfect correlation of 1.0000.

But better than that, this correlation is so strong that we can use it to reasonably predict what the U.S. household median income will be based upon how much money the federal government collected from all U.S. taxpayers during the past year! We've built a tool to do that math for 2010, using the information the U.S. Treasury has recently released for Fiscal Year 2010.

And that brings us to today, just a day before mid-term elections in the United States. Here, most polling and prediction markets indicate that the current majority Democratic Party will lose control of the U.S. House of Representatives and will lose a significant number of seats in the U.S. Senate.

If our household median income projection for 2010 is any indication, a major reason why these political events will occur is because of the elected members of the Democratic Party's collective decision to pursue President Barack Obama's poorly considered health care reform legislation, which derailed the recovery in jobs, and a number of extraordinarily ineffective economic stimulus and bailout plans.

Their pursuit of these schemes have come at the expense of pursuing more effective alternatives that could generate both genuine economic growth and jobs, which we would recognize in the form of a median household income that grows robustly from year to year.

In other words, they are destined to lose on 2 November 2010 because they have led the United States down the wrong path and worse, have shown no signs that they intend to get on the right one, much less any real willingness to even recognize that they're on the wrong one.