How much money will the U.S. federal government expect to collect from the Top 1% of American taxpayers if it changes their income tax rates? 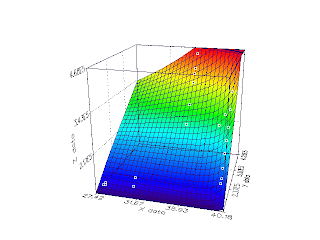 Well, instead of leaving the question to professionals, we're going to make it possible for you to get in on the action too with our latest tool! Now you too can ignore the dynamic effects of how the highest income earners in the U.S. might react to such a change and pretend that you'll collect as much or as little as what an expert-produced static tax analysis would predict!

How? Easy! We've taken the IRS' own data from 1986 through 2008, along with the maximum tax rates that applied through that time, and used it to create a model that can determine approximately how much the U.S. government would have collected from the Top 1% of U.S. taxpayers!

From there, we built a tool so all you have to do is to choose your hypothetical income tax rate and enter the amount of income that defines the floor for where the Top 1% of U.S. taxpayers begins to predict how much money they'll have to pay in income taxes!

In creating our tool, we used the IRS' data from 1988 through 2008, rather than from 1986 through 2008, since the tax rates that applied for most of these years applied for more than one year, or in the case of 2001 and 2002, were close in value to the maximum tax rates that applied from 1993 through 2000. With that being the case, the tool will provide the best projection of what the federal government would collect from the Top 1% of U.S. taxpayers in income taxes for tax rates ranging from 28% to 40%.

Having said that, we should note that the primary drivers of the federal government's income tax collections are incomes and the number of people who earn them, rather than the tax rates that might apply in a given year. 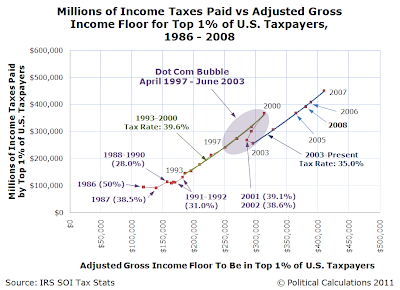 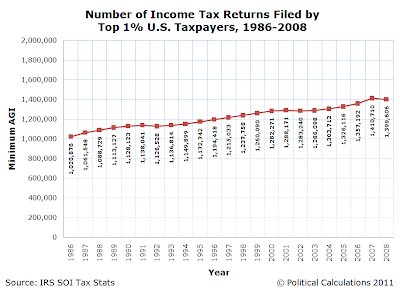 We don't have the data from the IRS yet, but we strongly suspect that figure fell further in both 2009 and 2010.

What we take away from this discussion however is that if the federal government really wants to collect more tax revenue from the Top 1% of U.S. taxpayers, it should focus on two things: increasing the number of people who earn incomes and promoting economic policies that help increase their real incomes.

Since the Top 1% of U.S. taxpayers typically pay more than a third of all the income taxes that the federal government will collect in any given year, a focus on promoting the fundamentals for economic growth and job creation is very important.

After all, the only reason there would be to increase tax rates would be to prop up tax collections if the government isn't capable of achieving either of these objectives. That situation would be similar to the death spiral that failing businesses go through when they try to raise their prices in attempting to stay afloat when they don't have the volume of business to support their costs of operation.

So it would be nice to have a President who would actually focus their attention on achieving these positive results, instead of just saying they will once a year, then not ever following through (Ref: 2008, 2009, 2010 and now in 2011). The way some people treat their New Year's Resolutions.

If only we had such a President....