The Associated Press thinks it's because gas prices are rising at the pump and because of bad weather:

Americans are driving less, with the holidays behind them and gasoline at two-year highs.

Gas costs around $3.10 a gallon, the highest price since mid-October 2008. Americans usually drive less in the winter, and recent bad weather across the country was further incentive to stay home. And money needs to go towards paying off holiday credit card bills.

But the AP seems to think that despite the views of an expert who, we couldn't help but notice, was the only named expert quoted in their entire article. Oddly enough, he doesn't seem to think that bad weather can be fingered as a culprit in what's behind what's driving Americans off the road, but is instead pointing the finger at low demand:

Drivers are "pulling back on gas right now but you can't tell whether it's weather-related," said Tom Kloza, publisher and chief oil analyst at Oil Price Information Service. "Unless you're in Boca Raton, Fla., or San Diego, you're seeing pretty sleepy midwinter demand."

We'll save you the trouble of reading the rest of the article to see if the AP ever bothered to back up their claim that bad weather was responsible for Americans driving less, because they didn't bother to do so. But that raises a good question: how has the demand for gasoline changed over time?

To find out, we've updated our chart tracking the approximate number of gallons Americans consume in oil products every day with the most recently available data which extends through October 2010 as of this writing. 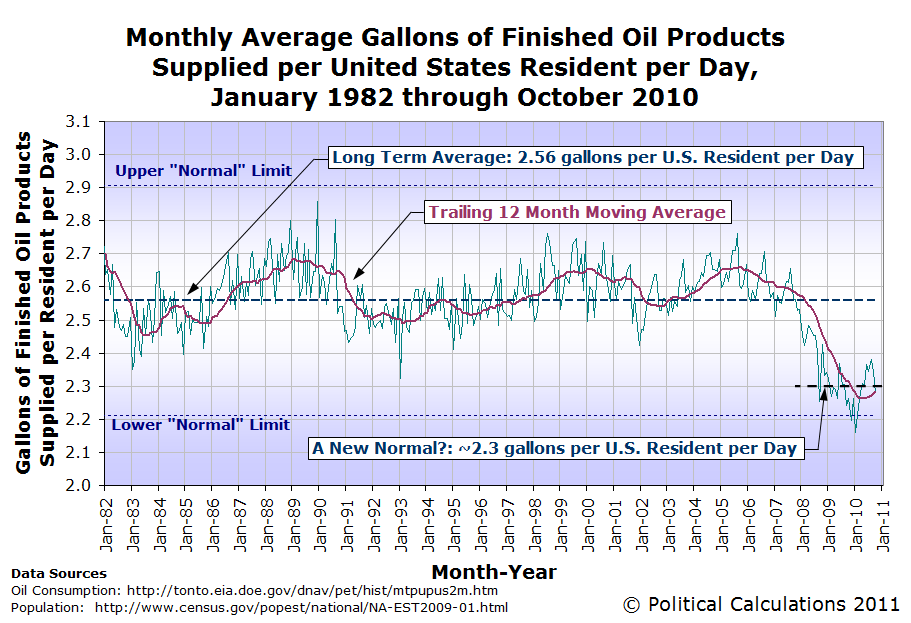 Which turns out to be something that even the Associated Press has noticed! In an article published in mid-December 2010, the AP reported that:

Americans are burning an average of 8.2 million barrels — 344 million gallons — of gasoline per day in 2010, a figure that excludes the ethanol blended into gasoline. That's 8 percent less than at the 2006 peak, according to government data.

Which, the AP reports, has made environmentalists very, very happy:

Environmentalists are looking at the trend with a mixture of disbelief and delight. A decade ago they thought demand would continue to grow 1-2 percent a year far into the future.

So could the AP in January 2011 be right about the price of oil having something to do with that?

As it happens, the average price of gasoline in the U.S. peaked during the summer of 2008 over $4 per gallon, when Americans were consuming more than the long term average of 2.56 gallons per day before falling to $1.75 per gallon by January 2009, before recovering and somewhat stabilizing at $2.75 per gallon through much of 2010. Prices began slowly rising again in October 2010 and are now over $3 per gallon in much of the nation.

But through most of those gyrations in the price per gallon of gas over the last few years, individuals Americans appear to have come to settle on consuming an average of 2.3 gallons of oil products per day. And from what we can tell, the price of oil only seems to be a minor factor affecting American oil consumption patterns - it has some effect, but not the effect the AP would have it claim. Especially if we go back and look how stable oil consumption has been in recent years (or at least up to 2008) with respect to how volatile gasoline prices have been over that time. 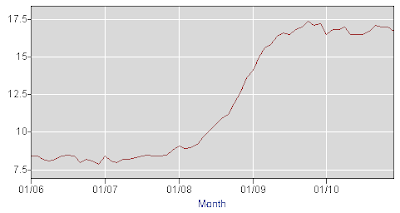 We do however have a more likely culprit for why Americans are consuming 8% less oil by the AP's measure which excludes added ethanol. Here is a chart from the U.S. Bureau of Labor Statistics indicating the percentage of American workers who are being counted as either unemployed or underemployed (the U-6 measure of unemployment) from January 2007 through December 2010.

We then observe that a sudden increase in the total unemployment and underemployment rate of 8.6% directly coincides with the period in which an 8% decrease in the actual amount of oil per person being consumed in the United States occurred.

That's because Americans who lost their jobs or who have had to accept employment at lower levels during the last few years are pretty unlikely to be out consuming the same levels of oil that they would if they had jobs or were working in jobs that pay what they are capable of earning in a healthy economy.

And that would seem to be the real reason why the environmentalists of the National Resources Defense Council are so unbelievably delighted. To them, that's a real unexpected success!