We were kind of amused over our year-end break to see that the lame-duck 111th U.S. Congress' Joint Economic Committee was out proclaiming that "the recovery from the Great Recession continues, and is occurring more quickly than the recoveries from the 2001 and 1990-1991 recessions." (HT: Carpe Diem)

In fact, we were so amused by that claim that we decided to check it out. To do that, we borrowed Calculated Risk's recession job loss and recovery data for each recession since World War II and worked out how long it took for each recession's job recovery to reclaim the jobs lost from the previous payroll employment peak, as indexed from the points at which maximum non-farm job loss occurred in each recession.

Our results are graphically presented below: 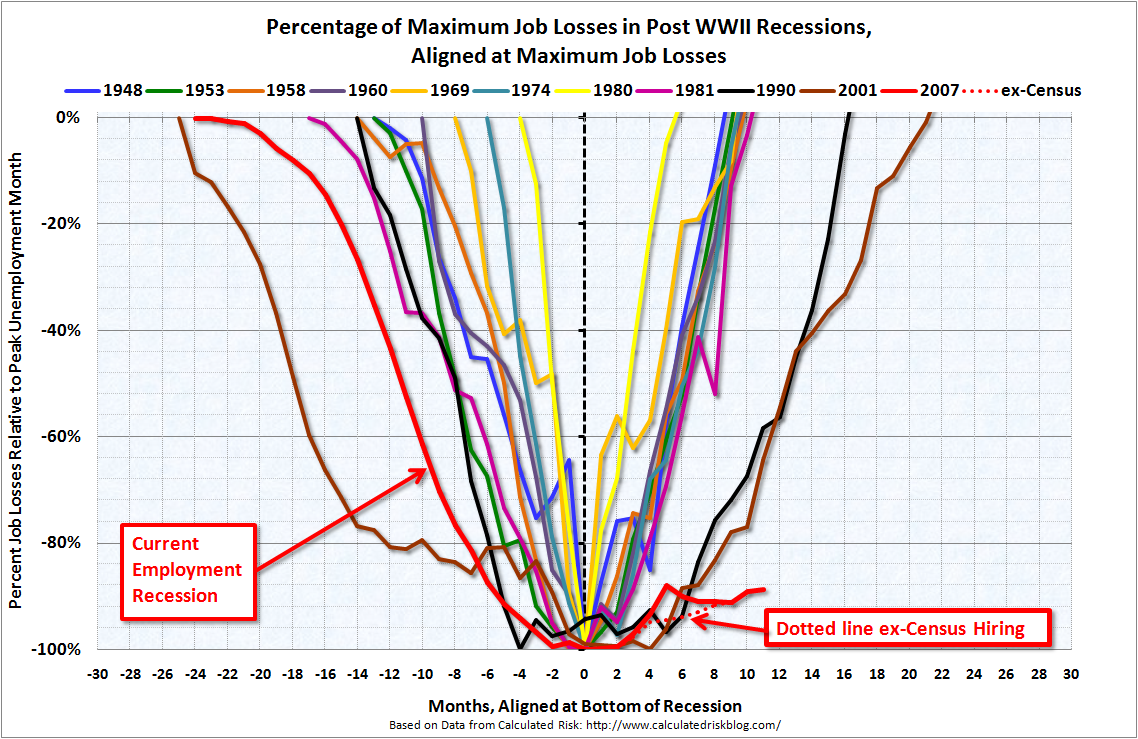 What we find is that as of November 2010, the 2007 recession does indeed feature the slowest non-farm job recovery of any recession after hitting bottom, both going by CR's adjusted bottoms for the 1990 and 2001 recessions (shown above) and the exact maximum job loss point for all recessions.

We don't know what exactly the Joint Economic Committee was doing during the lame-duck session of the U.S. Congress, but clearly, objectively verifiable facts weren't getting in their way of doing it! More seriously, the JEC's statement is accurate as far as it goes, but suffers from focusing on measuring change from when the recession was arbitrarily determined to be over in 2009, which comes at the expense of grasping the bigger picture - jobs were continuing to be shed from the economy well after June 2009. Economic myopia like this is common among politically-motivated groups1, where distorted views of reality often prevail.

That said, we're more optimistic that 2011 will see a much stronger recovery in jobs than did 2010, but then, it would be hard for it not to do so, wouldn't it?