Political Calculations
Unexpectedly Intriguing!
02 February 2011
The Educated and the Unemployed 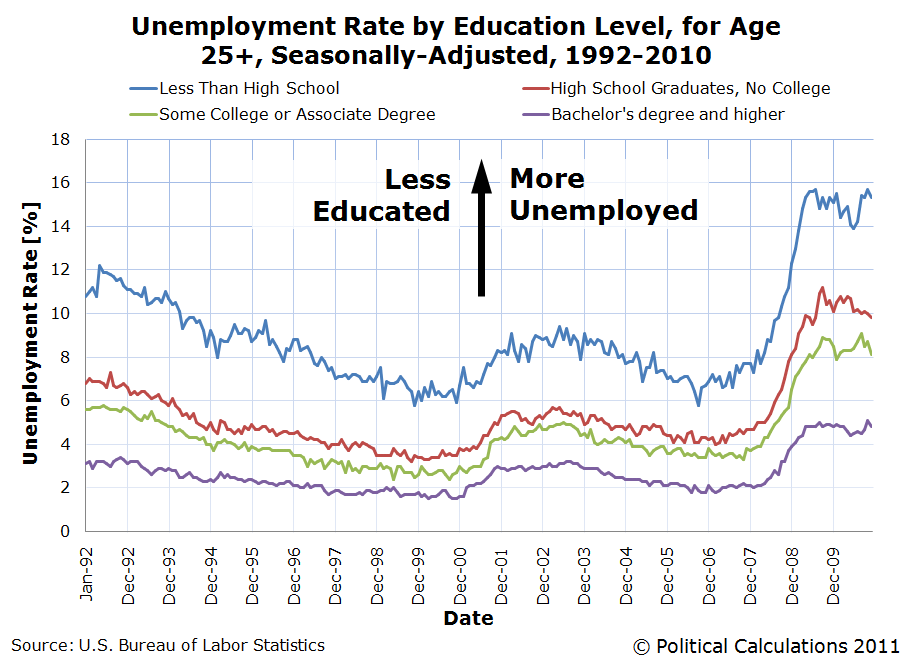 But does it really?

Since January 1992, the number of people in the civilian labor force for each education level has changed as shown in the table below (the BLS doesn't break this particular data out for those with either Some College or Associate degrees):

Now, let's approximate how many individuals Age 25 or older would be counted as being unemployed in both January 1992 and in December 2010 if the December 2010 unemployment rate applied at both times:

We also find that despite a much higher unemployment rate, the much lower number of people with less than a high school education today means that fewer of these individuals are being counted as unemployed as compared to 1992 if the same unemployment rate applied then.

Meanwhile, with a nearly static representation in the U.S. workforce between 1992 and 2010, we find that high school graduates without any college education would have little difference in the unemployment figures. If you ran into an unemployed individual at random, you'd have about the same 1 out of 2 chance of doing that today as you would have had then for our presented data.

Altogether, what these demographic changes indicate for our presented data is that if you were to meet an unemployed individual at random today, you would have a nearly a 1 out of 3 chance of running into one with a Bachelor's degree. In 1992, the odds of that happening would have been 1 out of 5, even if the same unemployment rate applied.

So, believe it or not, those with higher levels of education are more likely to be among the unemployed today than would have been the case almost two decades ago!