The employment situation in the U.S. showed real improvement for the second straight month in March 2011, as the number of employed Americans rose above the range of stagnation they had been in from April 2010 through January 2011. 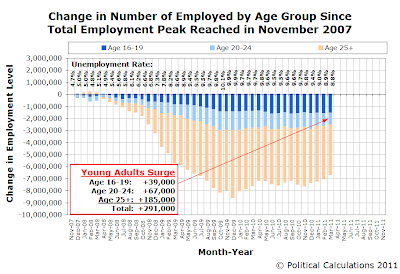 Breaking down the data by age group, each of the three age brackets we regularly track showed gains. However, given the relative size of each of the age brackets, the biggest relative gain with respect to their numbers in the U.S. workforce was made by teens and young adults between the ages of 20 and 24, who saw their numbers rise by 39,000 and 67,000 in March 2011.

Overall, 291,000 more people were counted as being employed in March 2011 than in February 2011, with the total employment level for the U.S. rising to 139,864,000. The last time that many people or more were employed was June 2009, the month the recession declared to have begun in December 2007 was declared to be over.

Looking two years into the future however, and looking a bit further forward in time using the latest projections of U.S. motor gasoline prices, we can see where today's high and rising oil and gasoline prices will translate into higher unemployment. 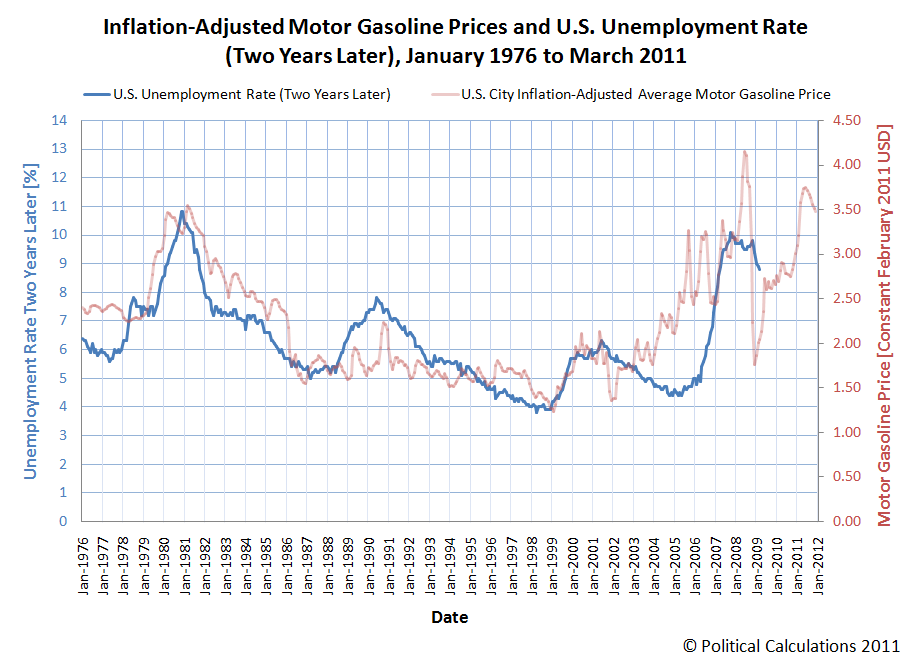 In the near term however, it would appear that the U.S. unemployment rate is likely to move into a range between 8.3% and 8.6% during 2011. However, the corrosive and lagging effect of rising gasoline prices currently forecast for this year by the U.S. Energy Information Administration upon the cost of doing business and the cost of consumer goods suggests that the improvement in the U.S. unemployment rate will first stall out and then reverse in 2012.

Given that negative trend, it is very likely that the U.S. unemployment rate will rise above the 9.0% level early in 2013.

There are, of course, other factors that could affect the timing of that reversal in the U.S. jobs situation, which would mark a new recession, which we'll explore in a future post.