We've been in the midst of a data conversion project behind the scenes here at Political Calculations, in which we've been upgrading our previously generated analyses that were maintained in Microsoft Excel's 2003 format to the newer 2010 format. As part of that project, we have also been automating various aspects of our analytical techniques, so we don't have to work as hard to divine what we can from the data we read.

Here, we've automated the "red flags" given by Western Electric's four major rules for detecting when an established trend might be breaking down, which in turn, allows us to more precisely track changes in trends over time.

As a result, we've refined our previous presentation of the seasonally-adjusted major trends in U.S. layoff activity, which we've presented in the chart below, where we've arbitrarily selected the first weekly new unemployment claims report of 2006 as our starting point. 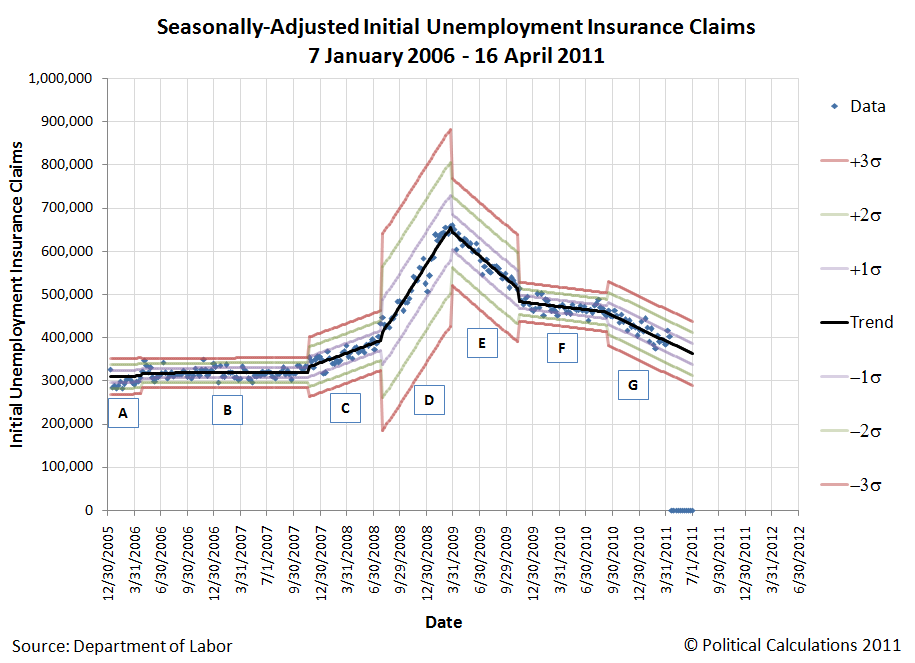 The table below lists the corresponding dates that apply to each identified trend, as well as the likely trigger that caused the shift initiating the trend. Here, we identify news events that could cause employers to revise their existing outlook for their employee retention decisions that occurred in the 2-3 weeks prior to the shift in trend taking hold.

This 2-3 week period of time is consistent with the practice of employers reacting to a change in their business outlook with their next payroll cycle, without altering their current payroll cycle. In the United States, since most employees are paid on a weekly or biweekly basis, that translates to our two-to-three week long window of time for a such a reaction to an outlook-changing event to be reflected in the government's official data.

We've also projected the current trend in U.S. layoff activity in our chart through the end of June 2011. The region between the light purple lines indicating the plus-or-minus one standard deviation from the mean trend line is the most likely region in which the data will fall going forward through that time, absent a break in the current trend.

Those ranges seem to be awfully wide, but we do have another trick up our sleeve for narrowing down the likely range into which new unemployment insurance claims will fall, which we'll share soon.