How fast do markets absorb and react to new information?

Let's find out using the action on the crude oil market on 5 May 2011. Crude oil prices had closed the previous day by dipping slightly to $109.24 per barrel, but the price of crude oil futures plunged unexpectedly to close below $100 per barrel on 5 May 2011 as the world's markets responded to changing expectations of the future demand for oil.

Prices fell because those future expectations changed as investors adapted to news that indicated that less oil would be demanded in the future than they had previously been anticipating. That news first came in the form of the U.S. Department of Labor's scheduled announcement of the U.S.' initial unemployment insurance claim applications for the week ending 23 April 2011, which was released at exactly 8:30 AM Eastern Daylight Time (EDT) on 5 May 2011, which unexpectedly showed a sharp increase in new jobless claims.

Our first chart below reveals that the crude oil futures contract for June 2011 was poised at $106.83 per barrel just before the announcement at 8:29 AM EDT:

The crude oil market next responded almost instantly to the news, sending crude oil prices immediately lower on the worse than expected announcement to a level below $106 per barrel, after which, crude oil prices trended gently lower over the next two hours.

But then, something happened to make futures traders send crude oil prices tumbling down its steepest descent of the day. As we'll show you next, what happened was that futures traders absorbed new information that revealed that the initial unemployment insurance claims data that had been released earlier that morning was far worse than had originally been presented by the Obama administration.

Here, the new jobless claims announcement had been tempered by suggestions that the much higher than expected number of new unemployment benefit applications had been driven by unique circumstances. That information, provided by the Department of Labor to reporters shortly after the new jobless claims report was released, limited the amount of the decline in oil prices at that time. 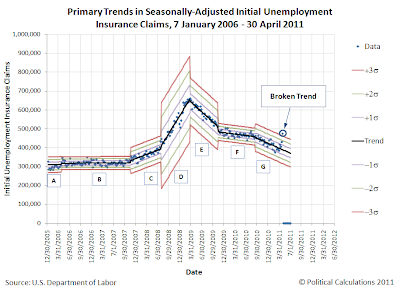 However, at 10:48 AM EDT, we posted our analysis of the new jobless claims data (although our post is time-stamped 7:48 AM, that time refers to Pacific Daylight Time, which is three hours behind the U.S. east coast.)

Unlike the information presented by the Department of Labor to mainstream media reporters earlier that morning, our analysis graphically revealed just how abnormal the initial unemployment insurance claims data released earlier the morning had really been. It was so abnormal that we declared that the positive trend that had been in place since 18 September 2010 was "officially over" and tied the break in trend to U.S. gas prices rising above a critical threshold.

As we weren't working to a schedule for our post, and as the topics we discuss vary considerably from day to day, we can guarantee that the crude oil futures market certainly had no advance indication of what we had in the works for that day. Our posts do however attract considerable attention from major investment houses, among other influential organizations (here's why that is), who subscribe to our blog's RSS feed and who therefore received our analysis within seconds of it being posted. It then took somewhere around two to four minutes from when our post went live to when we saw crude oil prices take their sharpest dive of the day [1].

The chart below shows where things stood at 10:50 AM EDT, just as the reaction to our analysis was beginning to take effect:

Within minutes, over $2.00 was shaved of the price of a barrel of crude oil. After that initial response, the market recovered a bit before steadily trending lower throughout much of the rest of the day. By 4:00 PM EDT, the official end of the core trading day for New York City markets, crude oil futures were below $100 per barrel.

So yes, we could very well have been the ones who really pushed world crude oil prices downward faster than they would have otherwise during 5 May 2011. So much so that several analysts now are projecting that instead of average prices of the $5.00 per gallon gasoline many were expecting in the United States during the summer of 2011, we'll now see prices at the pump of around $3.50 per gallon. [2]

Put another way, in one morning and without really trying, we did more to rein in U.S. gasoline prices than the Obama administration has since taking office in January 2009. How cool is that?! [3]

[1] That minutes-long delay in market response is consistent with what we observed back in January 2010, as the stock market reacted to the very unexpected news that Federal Reserve Chairman Ben Bernanke's re-nomination to his post was running into difficulty. Then, it took all of two to three minutes for stock prices to begin falling dramatically as investors were confronted by a sudden increase in the uncertainty for the future of Federal Reserve policy.

[2] You're welcome! In reality though, we can't claim credit for making oil prices decline, since the markets would eventually have figured out what we did anyway - at best, we just got the price of crude oil futures down to where they were going to go faster than they would have otherwise!

[3] Perhaps surprisingly, we'd only rank it a "5" on our own coolness scale. But then, after having pulled off the impossible, which ranks as an "11" on our 10 point scale, what chance did it ever have?