It may surprise you, but since we first introduced the "Modified Limo" method for forecasting what GDP will be a quarter ahead of time, we've never gotten around to making a tool that you can use to do our math!

Today, we're fixing that problem and doing just that! To use our tool with U.S. data, you'll need to get three pieces of data from the Bureau of Economic Analysis, which you'll find in Table 3 of the most recent GDP data release the agency has issued:

Here, you'll be specifically interested in three values: the real GDP data for the three most recently completed quarters, which is what we've circled in the excerpted image above for the most recent report which, at this writing, shows the advance estimate of U.S. inflation-adjusted GDP through the first quarter of 2011.

Next, enter that data into the tool below. And then click the "Calculate" button. Really! That's all you need to do, because forecasting GDP is that easy!

Using our default data, which coincides with the BEA's third estimates for inflation-adjusted GDP in the U.S. for the second, third and fourth quarters of 2010, our "modified limo" method would anticipate that real GDP in the next quarter, 2011Q1, will be $13,475.2 billion chained 2005 U.S. dollars. As you can see from the BEA's advance estimate for the first quarter of 2011, that's really close to their number of $13,438.8 billion.

The real comparison however will be when the BEA releases its third estimate of GDP for the first quarter of 2011, which as of this writing, will occur on 24 June 2011.

While our math is built using the finalized estimates for each quarter's GDP recorded by the BEA, it can be used with the BEA's advance and preliminary estimates to get a sense of where GDP will be in two quarters time. Because these estimates can change however, you should expect that those future projections will change as well. 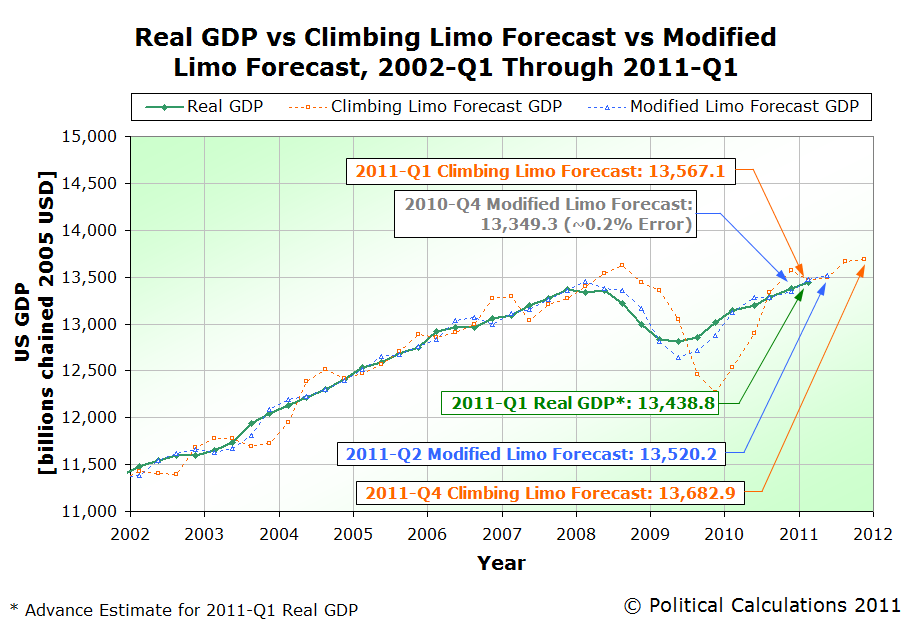 You can also see in the chart above that over time, the "modified limo" technique is self-correcting. Even if it goes off target, it will eventually go back to be either on target or nearly so. Generally speaking, the "modified limo" estimate will almost always be within two percent of the actually recorded value.

The "modified limo" method works because of the "inertial" nature of GDP - it tends to follow a trajectory defined by a simple linear function of time. Ivan Kitov has a neat discussion of the data supporting that contention in 1000 Arguments Against the Solow Growth Model.