Since we keep getting asked about an update of our chart showing the relative shares of U.S. debt owned by foreign powers, here's the picture as of 31 May 2011, the most recent period of time for which the U.S. Treasury has made the foreign ownership data available at this writing: 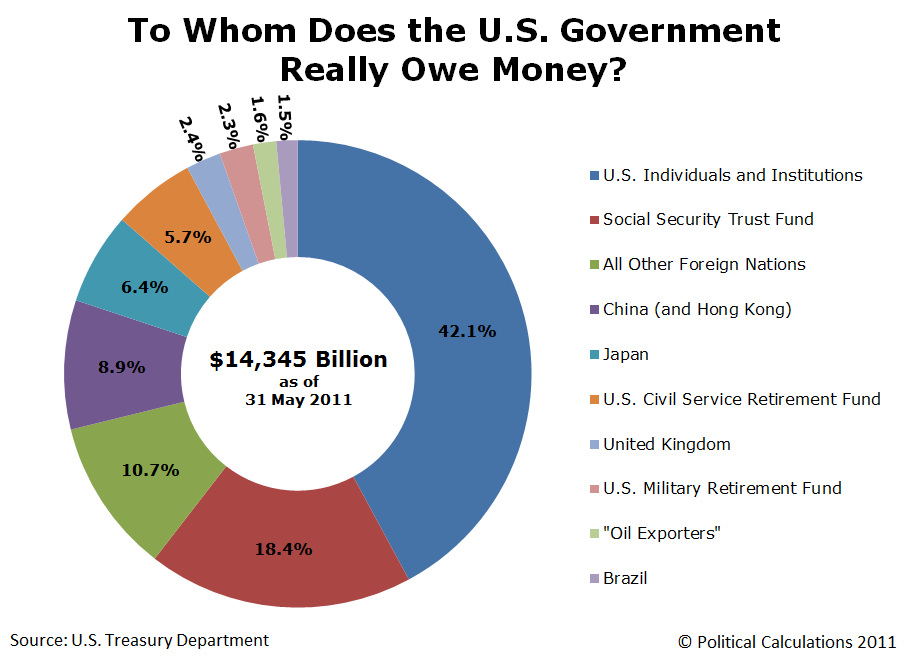 One thing to be aware of in considering this chart is the extent to which China uses financial institutions based in the United Kingdom as intermediaries in acquiring U.S. government-issued debt. With the U.K.'s share of the U.S. national debt having increased from 1.4% as of October 2010's revised data to the 2.4% shown above, it's very likely that a good portion of this apparent increase, if not all of it, is in fact owned by China.

How Much is Owned by the Federal Reserve?

Another question we are frequently asked is how much of the U.S. national debt is owned by the U.S. Federal Reserve. In July 2011, the Fed's report on its credit and liquidity programs and its balance sheet indicates that as of 25 May 2011, the combined total of U.S. Treasury securities and Federal Agency debt securities owned by the U.S.' central bank system totaled $1,638 billion, which represents approximately 11.4% of the total U.S. public debt outstanding.

For comparison, we previously estimated that the Fed only held 7.1% of the total U.S. national debt back in October 2010. With that massive increase in the percentage share of the U.S. national debt owned by the Fed that we observe through May 2011, we recognize that the supposedly independent U.S. Federal Reserve System, whose leaders are appointed by the U.S. President and approved by the U.S. Congress, has become the dominant lender to the U.S. government.