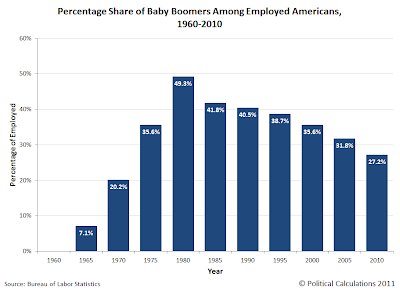 Occasionally in our projects, we come across data that's simply cool in and of itself. Today, we'll look at the history of the baby boom generation in the U.S. workforce, in five year intervals from 1960 through 2010.

Our first chart showing the percentage representation of Baby Boomers among the employed portion of the U.S. workforce.

Perhaps the most impressive thing in the chart above is how rapidly the Baby Boom generation rose to represent such a large share of the U.S. workforce, from virtually no representation in 1960 to peaking at 49.1% of all employed Americans in 1980.

Next, here are the actual number of Baby Boomers counted among the employed in the United States from 1960 through 2010, which we determined from the BLS' non-seasonally adjusted data from the Current Population Survey's Labor Force Statistics. 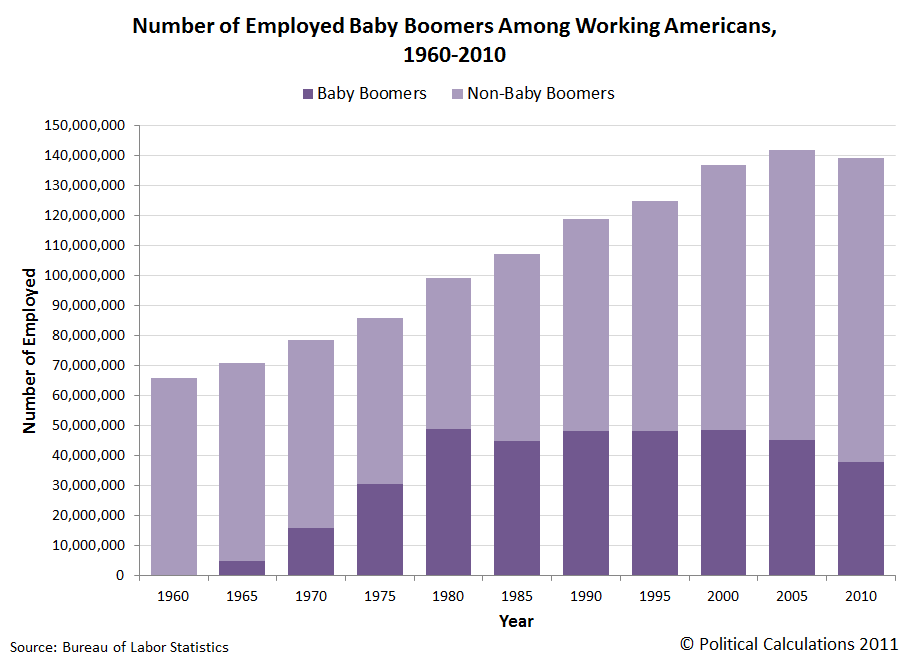 We suspect that much of this change represents the retirement of the most successful Baby Boomers, who we suspect really didn't want to keep working until they got anywhere near the age their they could draw full Social Security benefits, and who could get away with not working because they were well off enough to do so.

If we're right, we can expect to see the remaining, less well-off Baby Boomers extend their working years, especially if they saw their retirement savings take a major hit during the economic turmoil of the last several years.

And instead of a mass exodus from the U.S. workforce, we'll see the remaining Baby Boomers slowly ebb away.

Which means that where productive America is concerned, Baby Boomers are much like the month of March: "in like a lion, out like a lamb." Although Baby Boomers would likely see it very differently.