When we last looked at seasonally-adjusted initial unemployment insurance claims (aka "new jobless benefit filings") at the end of August 2011, we found that the average rate of new claims was falling at a level of about 800 per week.

Today, using data that the U.S. Department of Labor is just released, we find that the rate of improvement in U.S. layoff activity has slowed down: 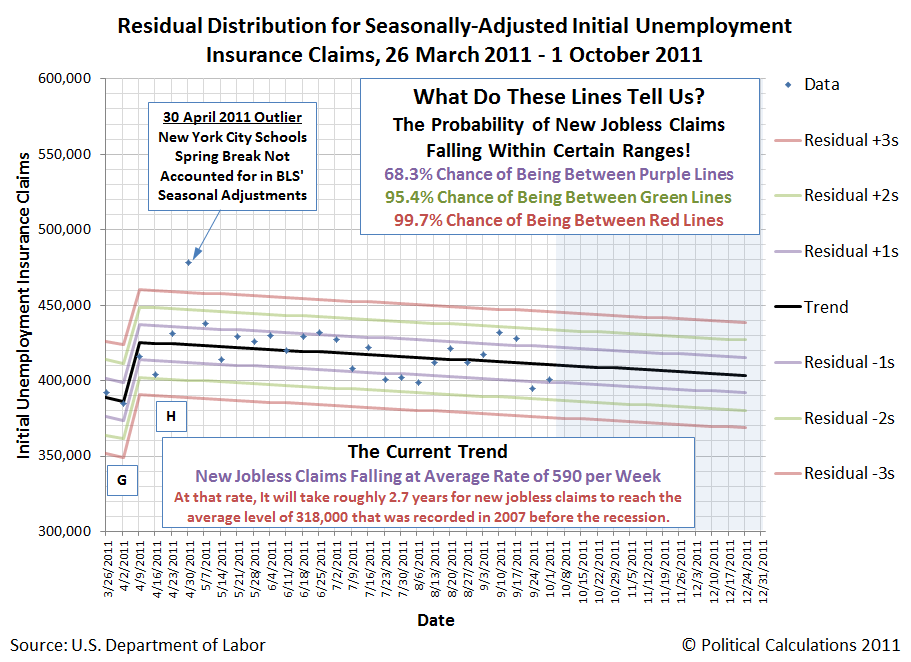 For the trend established since 26 March 2011, when the higher cost of doing business associated with high and rising oil and gasoline prices combined with expectations of lower revenue due to a slowing economy prompted U.S. employers to cut their costs elsewhere by laying off higher numbers of employees to keep their businesses afloat, we now find that the average weekly change in the number of new unemployment insurance claims filed each week is falling at a rate of 590 per week.

In a sense, this lower rate of improvement in the number of new layoffs each week indicates that the economy slowed during the month of September. At the present average rate of improvement, it will take another 2.7 years before the number of weekly new jobless benefit claims reaches the level of 317,600 that is consistent with a "stabilized" U.S. economy, which was recorded in 2007 prior to the peak of expansion that marked the beginning of recession in December of that year.

Unless, of course, something changes to positively affect the overall business outlook of U.S. employers. In which case, we'll see that change marked by a rather sudden shift pushing the number of new jobless claims below the lower red line marking the outer boundary of the general trajectory we can reasonably expect the current trend to follow.

What that might be, we have yet to see. We can confirm however that the "American Jobs Act" that President Obama introduced before a joint session of Congress on 8 September 2011 had no significant effect upon the business outlook of U.S. employers.