Political Calculations
Unexpectedly Intriguing!
17 November 2011
The Distribution of Income for U.S. Women in 2010

According to Forbes, Oprah Winfrey earned approximately $290 million in 2010.

That is, quite possibly, the highest income earned by any American in 2010. Going by data from the Social Security Administration, only 81 people in the United States had wage or salary income above $50 million in 2010. Since we can safely assume that most of those individuals at this highest end of the income spectrum would be clustered near the $50,000,000 mark, the odds that Oprah Winfrey actually earned the highest income of anyone in the U.S. in 2010 are very good.

It's all the more remarkable because of how Oprah Winfrey derives her income: by developing and providing entertainment media that successfully targets American women. In a sense, Oprah's annual income represents the direct transfer of the income earned by lower-earning women to her.

To get a sense of the scale of that transfer, we've tapped the U.S. Census' data on the total money income distribution of women in the United States in 2010. Our results are presented in the chart below: 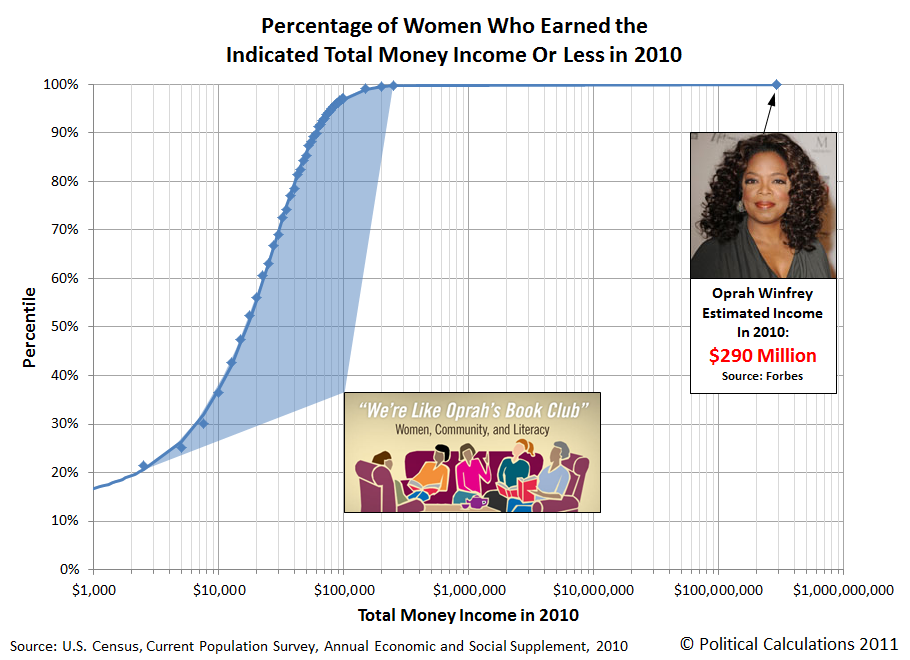 If you're one of the 125,084,000 American women Age 15 or older who earned income of any type in 2010, you can see how you compare with all other women by entering your 2010 income into the tool below. Our tool will tell you what percentage of American women earn as much, or less than you!

The default income entered in the tool is the approximate median total money income for all women Age 15 or older in the U.S, regardless of whether they work full or part time, or even if they don't work at all or simply volunteer and earn no income. As the estimated median point, half of all women in the United States will have incomes below this mark, while half will have incomes above that amount!

Of course, if you're Oprah, you'll find that 100% of American women earned as much, or less than you. Make that "much less" than you!

We'll close with one final tidbit of information. Oprah Winfrey's estimated $290 million income in 2010 represents 0.0092% of all the income earned by women in the United States in 2010.

The inset images on our chart were taken from the U.S. government's Homelessness Resource Center and Girlshealth.gov web sites!