What effect did the Federal Reserve's quantitative easing programs have on U.S. stock prices in the three years from November 2008, when it was first suggested, and today?

To find out, we'll do an event analysis - we'll match up the level of stock prices as measured by the S&P 500 with the timing of the Federal Reserve's announcements and implementation of its two rounds of quantitative easing (aka "QE1" and "QE2").

The Federal Reserve Bank of St. Louis maintains a timeline of the events and policy actions that have been taken with respect to the financial crises since 2007. Here are the key milestones with respect to the Fed's quantitative easing programs, along with some other notable events. Our chart below shows the overall timeline over the past three years: 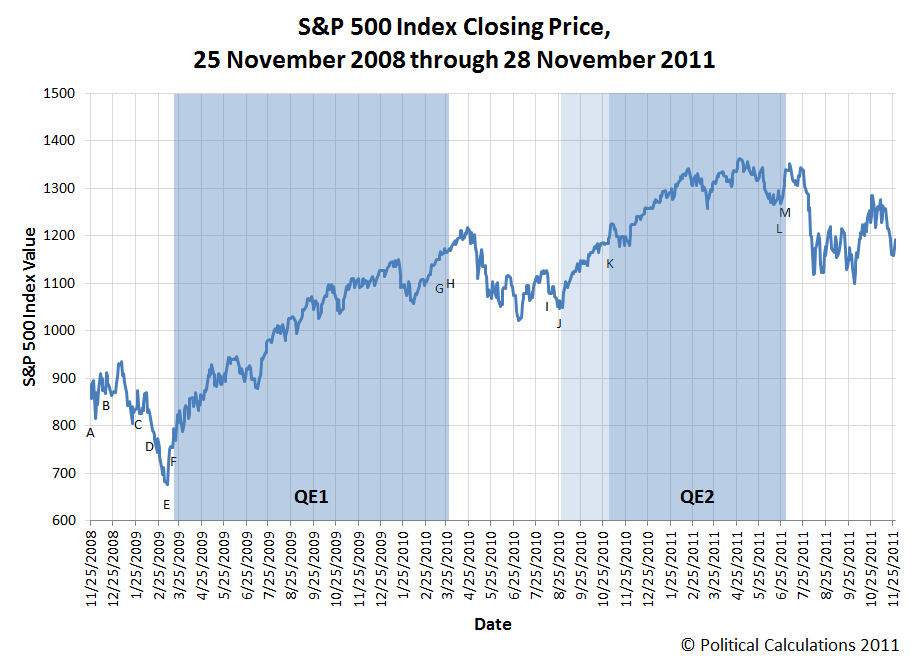 The Federal Reserve Board announces a new program to purchase direct obligations of housing related government-sponsored enterprises (GSEs)—Fannie Mae, Freddie Mac and Federal Home Loan Banks—and MBS backed by the GSEs. Purchases of up to $100 billion in GSE direct obligations will be conducted as auctions among Federal Reserve primary dealers. Purchases of up to $500 billion in MBS will be conducted by asset managers.

The focus of the Committee's policy going forward will be to support the functioning of financial markets and stimulate the economy through open market operations and other measures that sustain the size of the Federal Reserve's balance sheet at a high level. As previously announced, over the next few quarters the Federal Reserve will purchase large quantities of agency debt and mortgage-backed securities to provide support to the mortgage and housing markets, and it stands ready to expand its purchases of agency debt and mortgage-backed securities as conditions warrant. The Committee is also evaluating the potential benefits of purchasing longer-term Treasury securities.

The Federal Reserve continues to purchase large quantities of agency debt and mortgage-backed securities to provide support to the mortgage and housing markets, and it stands ready to expand the quantity of such purchases and the duration of the purchase program as conditions warrant. The Committee also is prepared to purchase longer-term Treasury securities if evolving circumstances indicate that such transactions would be particularly effective in improving conditions in private credit markets.

U.S. Congress approves President Barack Obama's "Stimulus Package". The measure will inject an estimated $787 billion (the CBO estimates that $821 billion was actually spent) into the U.S. economy through a variety of tax credits, transfers to support state government programs and "shovel ready" infrastructure projects. The measure is signed into law on 17 February 2009.

The stock market bottoms. After this point, stock prices begin rising as the rate at which business conditions are worsening begins to decelerate.

The FOMC votes to maintain the target range for the effective federal funds at 0 to 0.25 percent. In addition, the FOMC decides to increase the size of the Federal Reserve's balance sheet by purchasing up to an additional $750 billion of agency mortgage-backed securities, bringing its total purchases of these securities to up to $1.25 trillion this year, and to increase its purchases of agency debt this year by up to $100 billion to a total of up to $200 billion. The FOMC also decides to purchase up to $300 billion of longer-term Treasury securities over the next six months to help improve conditions in private credit markets. Finally, the FOMC announces that it anticipates expanding the range of eligible collateral for the TALF (Term Asset-Backed Securities Loan Facility).

The FOMC announces that "The Committee will maintain the target range for the federal funds rate at 0 to 1/4 percent and continues to anticipate that economic conditions, including low rates of resource utilization, subdued inflation trends, and stable inflation expectations, are likely to warrant exceptionally low levels of the federal funds rate for an extended period. To provide support to mortgage lending and housing markets and to improve overall conditions in private credit markets, the Federal Reserve has been purchasing $1.25 trillion of agency mortgage-backed securities and about $175 billion of agency debt; those purchases are nearing completion, and the remaining transactions will be executed by the end of this month. The Committee will continue to monitor the economic outlook and financial developments and will employ its policy tools as necessary to promote economic recovery and price stability.

"In light of improved functioning of financial markets, the Federal Reserve has been closing the special liquidity facilities that it created to support markets during the crisis. The only remaining such program, the Term Asset-Backed Securities Loan Facility, is scheduled to close on June 30 for loans backed by new-issue commercial mortgage-backed securities and on March 31 for loans backed by all other types of collateral."

At first, investors appeared to have shared the Fed's assessment that it had successfully combatted the deflationary forces that had appeared set to overrun the U.S. economy, as stock prices continued to rise for nearly a month after the end of QE1. But over the next several months, expectations for deflationary conditions in the U.S. re-established themselves, sending stock prices approximately 10-15% lower. The Fed responded to the resurgence of deflationary expectations by launching a new round of quantitative easing, now known as QE2.

Federal Reserve chairman Ben Bernanke states that "The committee is prepared to provide additional monetary accommodation through unconventional measures if it proves necessary, especially if the outlook were to deteriorate significantly", and that he believes "that additional purchases of longer-term securities, should the FOMC choose to undertake them, would be effective in further easing financial conditions."

The Fed's first announcement was aimed at reassuring investors that the Fed wouldn't seek to immediately unload the securities it had bought up in its first round of quantitative easing, which could negatively impact markets in that a sudden increase in the supply of these securities being unloaded would push their prices downward.

But that wasn't enough to assure investors, which eventually led Fed Chairman Ben Bernanke to firmly commit to a new round of quantitative easing.

Here, it appears that the announcement that the Fed would indeed initiate a new round of quantitative easing had a strong effect upon stock prices, leading them higher well before the program actually went into effect. The lack of a similar effect when the Fed first announced it would initiate QE1 might be attributable to the unfamiliarity of investors at the time with what the Fed might be able to achieve with such a program, which had never previously been attempted in the United States. The Fed's apparent "success" with its previous round of quantitative easing gave it credibility among investors ahead of the second round, who responded positively.

The FOMC announces its decision to expand its holdings of securities in order to promote a stronger pace of economic recovery and to help ensure that inflation, over time, is at levels consistent with its mandate. The Committee will maintain its existing policy of reinvesting principal payments from its securities holdings and to purchase a further $600 billion of longer-term Treasury securities by the end of the second quarter of 2011, a pace of about $75 billion per month.

The FOMC announces that "The Committee continues to anticipate that economic conditions--including low rates of resource utilization and a subdued outlook for inflation over the medium run--are likely to warrant exceptionally low levels for the federal funds rate for an extended period. The Committee will complete its purchases of $600 billion of longer-term Treasury securities by the end of this month and will maintain its existing policy of reinvesting principal payments from its securities holdings. The Committee will regularly review the size and composition of its securities holdings and is prepared to adjust those holdings as appropriate.

QE2 ends, with no immediate plans for a third round of quantitative easing.

One interesting observation we have is that it appears that investors "buy into" the Fed's initial assessment that there's no additional need for its quantitative easing programs for up to about a month afterward. And then, they adjust their perceptions to reflect changing conditions.

It would be interesting to observe the stock trades of Federal Reserve officials to see if they have the same kind of investing "luck" as the members of the U.S. Congress or their staffs.