The advance GDP estimate for the fourth quarter of 2011 was released on Friday, 27 January 2012, with that quarter's inflation-adjusted GDP figure being reported at $13,422.4 billion, in terms of constant 2005 U.S. dollars.

That value is just 0.29% higher than what we would forecast using our Modified Limo method for projecting the value of GDP in the next quarter, using the final value of $13,331.6 billion for the third quarter of 2011. 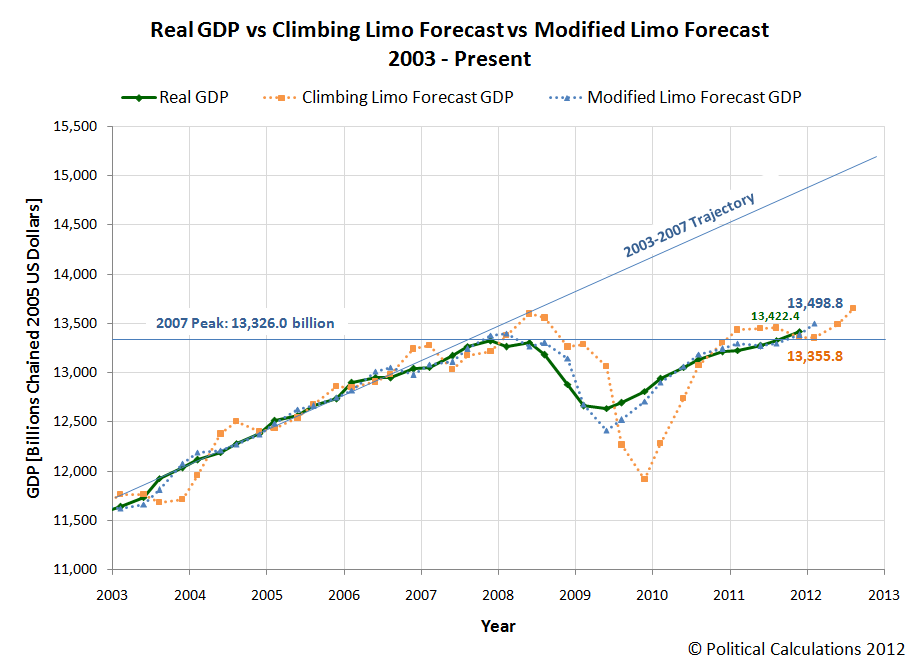 On a side note, since Political Calculations was on our annual year-end hiatus when that final value for 2011-Q3 GDP was reported, and because we had never updated our previous public projection of $13,393.3 billion, the advance figure for 2011-Q4 real GDP is just 0.21% higher than our last posted forecast.

In any case, we anticipate that this figure will be revised lower by the time the BEA's third estimate for 2011-Q4's GDP is recorded.

Looking forward and assuming that the forecast given our Modified Limo methods follows a normal distribution with respect to the trajectory of real GDP, we currently anticipate the following for GDP in the first quarter of 2012, in terms of constant 2005 U.S. dollars:

The midpoint for our forecast range for real GDP in 2012-Q1 is currently $13,498.8 billion. We will revise these projections as the U.S. Bureau of Economic Analysis revises its estimate of real GDP in 2011-Q4. The BEA will release its second and third estimates of real 2011-Q4 GDP in February 2012 and March 2012 respectively.

At present, it appears that our overall forecast of U.S. economic performance remains on track. We continue to anticipate that the most recently reported pace of economic growth will begin decelerating in the first quarter of 2012.

For our GDP forecasts, any major deviation from our projections is an indication that the U.S. economy is undergoing a significant change in its overall economic trajectory, which you can see in our chart above whenever the economy goes through a major turning point. One advantage of our methods is that the results are useful, even on those rare occasions when they turn out to be off target.

If you'd ever like to play along at home, we've created a tool that will calculate the midpoint of our forecast range!