Political Calculations
Unexpectedly Intriguing!
30 May 2012
Economic Growth and the Chains of Debt

To find out, we created the following chart showing a relationship between the inflation-adjusted economic growth rates for the member nations of the Organization of Economic Cooperation and Development (OECD) against their "publically-held" debt-to-GDP ratios in 2011: 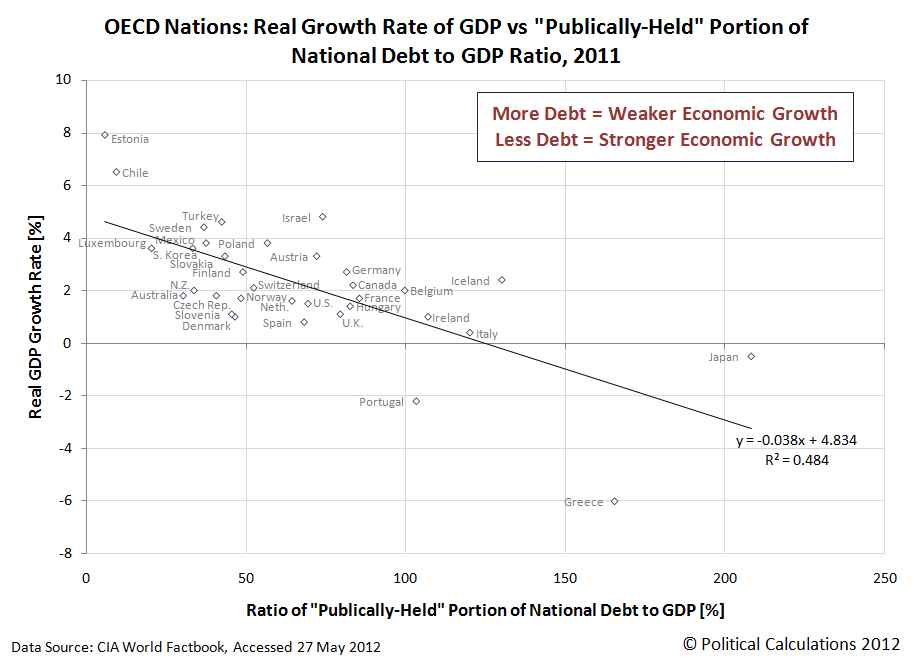 What we see is that high levels of national debt with respect to the size of a nation's economy, would appear to have a medium-strength effect upon its real rate of economic growth. For every 10% increase in a country's national debt with respect to its GDP, it would appear that its real economic growth rate is reduced on average by roughly 3/8th of a percent. A 26% increase in a nation's debt-to-GDP ratio then would coincide with the shaving of a full percent off its real GDP growth rate.

Looking at the United States' position on the chart, we note that the debt indicated in the chart applies only to the "publically-held" portion of its national debt - if we included the "intragovernmental" portion of its national debt, as would represent a more correct accounting of how much money the U.S. government has really borrowed, it would be over 100% of GDP in 2011.