What if, instead of wastefully subsidizing all those eyesore wind turbines that really have proven to be not-so-great at providing power so much as they are a highly effective means of killing flocks of endangered birds, we took a step back and built wind turbines that can both generate electricity and not kill birds with their gigantic turbine blades?

To that end, we're going to explore an interesting trend among the engineers and designers who actually care about achieving both these goals, inflatable wind turbines!

Via Core77, the first concept we're featuring today is being developed as a very low cost, yet effective way, to provide power from the wind on a small scale in remote locations:

It might be called Compromise Design: If cost constraints would prevent the perfect object from being commercially successful, is it better to design something with inferior performance but feasible manufacturability?

That was the question answered with a "yes" by Israeli company Winflex Wind Turbines, whose Composite Material Flexible Rotor consists of sail-like blades connected to an inflatable wheel. 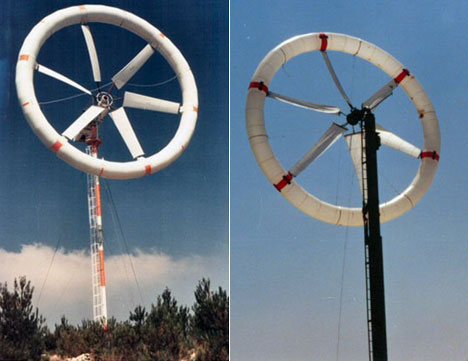 The unique rotor design enables a dramatically simpler overall turbine layout resulting in a cost effective and competitive system for a wide range of power ratings, starting with small turbines and scaling up to MW range. The unique and simple manufacturing method of the rotor, without the need for expensive molds or special tooling, enables tailor-made, rapid design and assembly of the WINFLEX turbine, according to the specific site characteristics and customer requirements, providing maximum efficiency and overall cost effectiveness.

Sure it's not as efficient as a conventional wind turbine, but its lower cost, durable structure, easy transportation & installation, and low-maintenance will hopefully outweigh that in the marketplace, enabling a bunch of these to go up where the regular kind was too expensive.

It occurs to us that the inflatable portion of the turbine's design could go a long way to reducing the death rates associated with birds attempting to fly through areas with hundreds of "regular" wind turbines.

But then, these kinds of turbines are still where birds are most likely to be: within just a few hundred feet of ground level!

So what if you were to make an inflatable wind turbine that you could fly above where most of the birds are, which would also make it more efficient at producing energy?

The problem with wind turbines as an energy source are those darn towers and enormous blades. No one likes living under them, with people complaining that the stroboscopic effect of continuously sliced sunlight gives them headaches. Thus wind farms have to be tucked away in remote locations, which means trucking the construction supplies out to those remote locations to build them in the first place. And the construction isn't easy: The sites are of course chosen for their persistently strong winds, a crane operator's nightmare.

Altaeros Energies, a company developed out of MIT research, has been working on a rather brilliant solution: A floating wind turbine. By placing the blade inside a tethered, massive balloon, you can float the thing up to high altitudes (where the winds are five times stronger than what you get at the top of a tower), no construction necessary. And neighbors aren't likely to complain about a balloon 1,000 feet in the sky.

As for what you saw in the video, Core77's hipstomp comments:

What you saw there was a scaled prototype, 35 feet in diameter. During the test run it arrived on-site in a dock attached to a trailer, then deployed, activated the turbine, and returned to the ground—all automatically. At its highest altitude of 350 feet, it successfully got the turbine to generate twice as much juice than it gets at tower height. We'd say Altaeros is one to watch.

As an extra bonus, flying the wind turbines would eliminate the problem that regular wind turbines have of keeping the ground from cooling off at night.

The future is a lot more interesting place than you might ever have thought!