Do high gasoline prices affect the number of layoffs in the United States?

Three and a half weeks ago, we announced that we were going to run a live test on the U.S. economy to answer this question, where by having the average gasoline price across the nation drop below $3.50 per gallon, the level that has come to define high gasoline prices in the U.S., we would trigger a downward shift in the established trend for the number of seasonally-adjusted new jobless claims filed each week [1].

With yesterday's report on the number of initial unemployment insurance claims being filed through the week ending 21 July 2012, we can confirm that a such shift has indeed taken place. Here's the graphic proof: 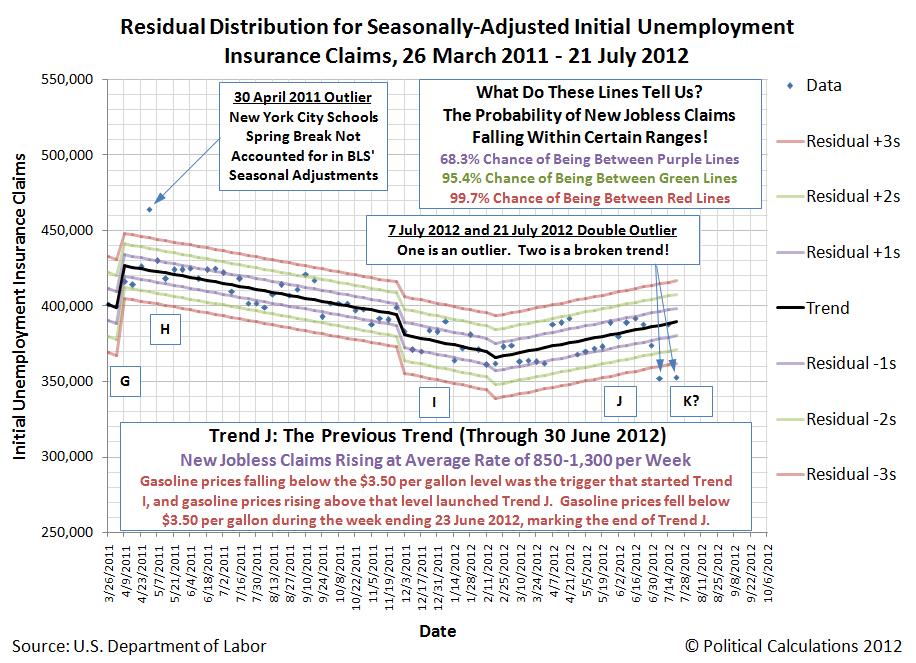 As we had expected, the week of the 4 July 2012 holiday played a bit of havoc in our being able to claim success for our experiment sooner, as a number of automakers delayed their annual mid-year plant shutdowns by a week, amplifying the seasonally-adjusted figure reported by the Bureau of Labor Statistics for the week ending 14 July 2012. Simply put, the BLS' statistical adjustments didn't account for the difference in the timing of the automakers shutdowns from previous years, so the figure recorded for that week is far higher than it would otherwise have been recorded if the BLS' data jocks could have anticipated the automakers' change in practice from previous years.

In the next phase of our experiment, we're going to see if we can boost the national average price of gasoline in the U.S. back up over the $3.50 per gallon mark to trigger yet another shift in the number of layoffs resulting in new unemployment benefit claims filed each week before a new trend has a chance to really get started. With the price of Brent crude oil rising in recent weeks, which is pushing gasoline prices across the U.S. higher, we should observe a negative upward shift in the number of new jobless claims filed each week if we can sustain an increase in the price of Brent crude over $106.50 per barrel [2].

We're not sure yet if our Eurominions can do this, and we realize that many may be unhappy with our manipulation of global oil prices just for the sake of seeing if they affect the level of new jobless claims in the United States, but remember, "it's supposed to hurt. It's science!"

Besides, what can possibly go wrong?

[1] A less fun, alternate explanation for what's just happened is that we recognized that the average price of gasoline in the U.S. was about to fall cross the $3.50 per gallon level that has previously preceded shifts in the established trends for new jobless claims by 2-3 weeks, so we predicted that a shift in the established trend for new jobless claims would take place within two to three weeks, the typical lag time between an event that affects the business outlook for U.S. employers and when it shows up in the BLS' data.

[2] Don't blame us! There are other factors that have been driving up oil prices in recent weeks! We just happen to be at a place where we're close to where they result in crossing that critical $3.50 per gallon threshold again. As for our causing gasoline prices to change, well, that would be impossible for us to do, right?