Upon which income earners will fall the greatest burden of paying the greatest tax burden from the Patient Protection and Affordable Care Act (aka "ObamaCare")?

To find out, we tapped our detailed income distribution data for individuals for the year 2010, the most recent year for which it is available (the data for 2011 will be published in September 2012). We then took Henry Blodget's description of how ObamaCare's mandate penalty tax is calculated, then multiplied the amount of tax that would have to be paid for a given level of total money income by the number of people we estimate earned it in 2010!

Here's what we found: 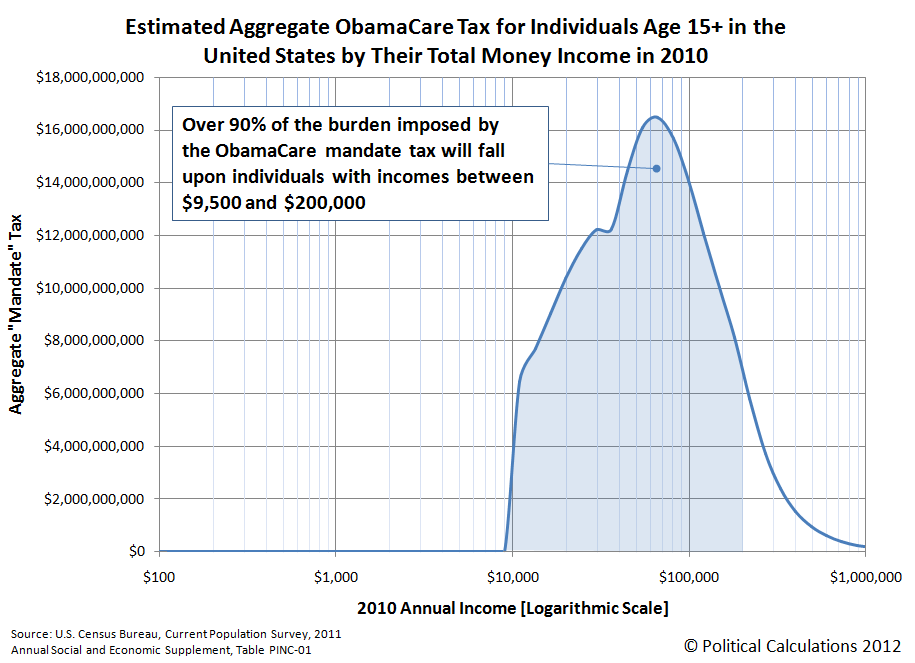 Of course, the alternative to paying the ObamaCare mandate tax is to have health insurance, either on your own or through your employer, which in 2011, cost $5,429 on average for Single coverage and $15,073 for Family coverage in 2011. Henry Blodget describes the "maximum" tax that might have to be paid by high income individuals:

... the penalty can never be more than the cost of a "Bronze" heath insurance plan purchased through one of the state "exchanges" that will be created as part of Obamacare. The CBO estimates that these policies will cost $4,500-$5,000 per person and $12,000-$12,500 per family in 2016, with the costs rising thereafter.

And that's what sets up the lottery math for healthy Americans, who are much likelier to benefit by dropping their health insurance coverage than paying for it under the ObamaCare law.

Just so long as they also take steps to under-withhold their income taxes, since it appears that the IRS will only be able to collect the tax by seizing part or all of these individual's annual tax refunds!