We're not wrong often, but we're happy when we are.

The reason why is because that means the world has turned out to be a much more interesting place than we had previously supposed.

Today's celebration of wrongness on our part comes from the first public prediction we've offered in a very long time that we missed. Here, on 6 August 2012, we looked at the rising level of the national average price of gasoline in the United States and predicted that we would see an upward shift in the number of new jobless claims filed each week some two to three weeks after they rose above the $3.50 per gallon mark.

Here, we noted that they had risen above that mark on 30 July 2012, which would have our predicted surge in new jobless claims sometime between 11 August 2012 and 18 August 2012 (or as we had described it on 6 August 2012, "either with this week's jobless claim data or with next week's data").

Today's initial data release for the week ending 18 August 2012 from the BLS, although showing an "unexpected" increase, doesn't qualify as the upward shift we had expected. Our chart below shows where the latest data fits with respect to what we've identified as Trend J, which ended on 30 June 2012. 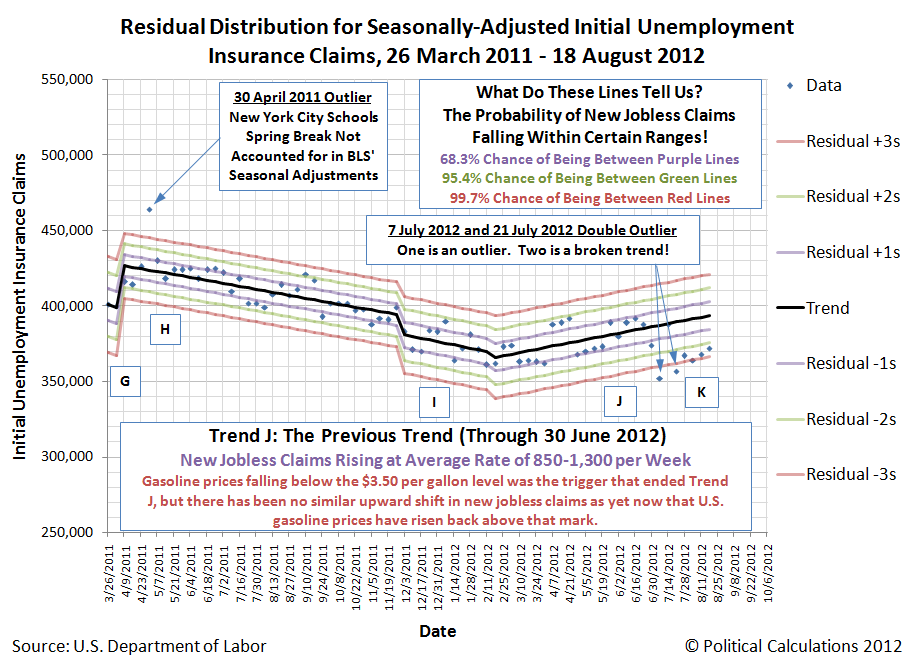 Thanks to volatility in the data related to how the BLS does its seasonal adjustments, which didn't match up with the timing for when a number of U.S. automakers actually took their mid-year plant shutdowns this year, we don't yet have enough data points to indicate the current Trend K (ideally we need at least six to ten weeks of consistent data to model a trend using our methods). Using our statistical control chart-inspired equilibrium limits however, you can see that Trend K so far appears to paralleling Trend J's upward trajectory, which indicates continuing weakness in the U.S. job market.

And that's pretty much where we're at today. We'll be exploring what factors might be behind our missed prediction in our next post on the topic, but here's a short list of what we're weighing today:

We're psyched for next week's data! And the best part is that we don't know which of these options, or others we've not yet listed, might apply!