Today we're featuring a simple chart showing two streams of data published by Standard and Poor in their S&P 500 Dividend Report, showing the number of companies in any given month that have either increased or decreased their dividends per share since January 2004.

As it happens, we might have stumbled into another alternate indicator of the relative health of the U.S. economy. Here's the chart: 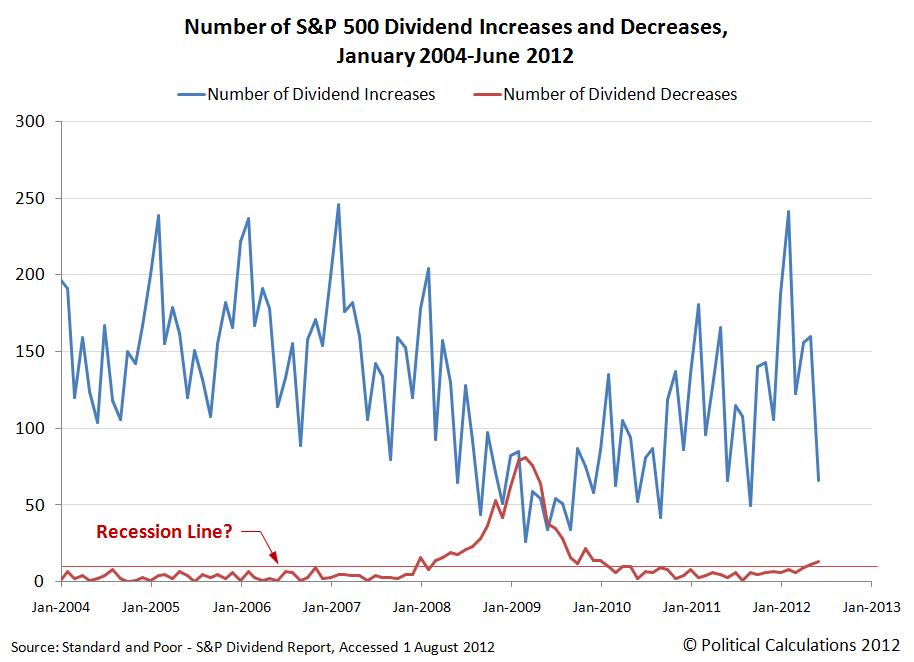 Looking at just the number of companies that acted to cut their dividends since January 2004, it would appear that when there are 10 or more in a given month, it would seem to coincide with periods of time in which the private sector of the U.S. economy is relatively distressed. At least, that's what we see when we look at the most recent recession in the U.S., which officially began in December 2007 and continued through June 2009.

We note that the number of companies cutting their dividends didn't fall back below 10 until February 2010, but given the relative weakness of the private sector economy in the U.S. at that time, perhaps that should be expected.

Meanwhile, a month where the number of S&P 500 companies that cut their dividends is less than 10 would seem to correspond to periods in which the private sector was relatively "healthy" by comparison.

That brings us to today, where we note that the number of S&P 500 companies acting to cut their dividends in today's economy just notched above the "10 line" in May 2012, staying above it in June 2012.

We believe that indicates the U.S. economy is definitively showing signs of distress. The question now is how long will that continue?

In case the direct link to S&P's Dividend Report doesn't work, the Excel spreadsheet can be accessed through the S&P 500 Monthly Performance Data section of Standard and Poor's Market Attributes site.