Over the last several months, we've been featuring a number of patents that, well, can only be described as "unusual". Our list so far includes:

What all these patents have in common is that they involve some degree of unique creativity by their inventors. Our unusual patent today however involves just about absolutely no creativity on the part of the individual who filed the patent, except perhaps for their ability to convince the U.S. Patent and Trademark Office to issue them a patent for their "invention" in the first place. 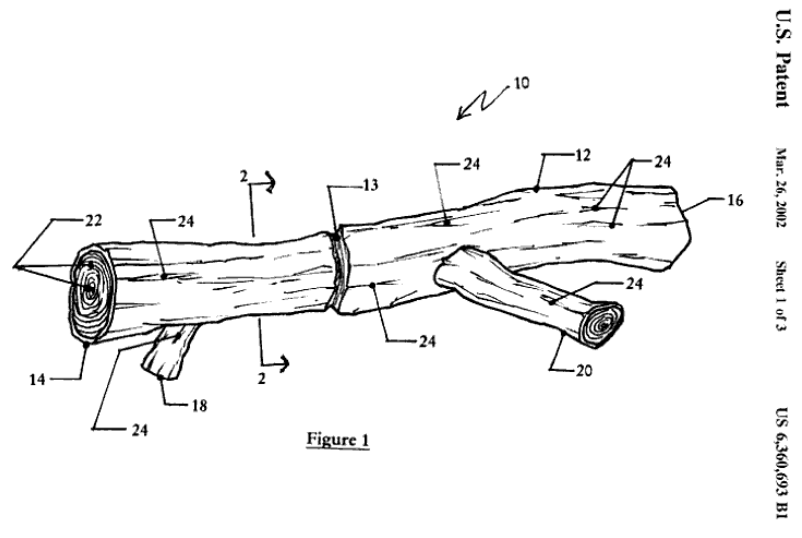 Yes, someone actually convinced the U.S. Patent Office to issue them a patent for a stick. Really. We're not making this up. Here's the patent's abstract:

An apparatus for use as a toy by an animal, for example a dog, to either fetch carry or chew includes a main section with at least one protrusion extending therefrom that resembles a branch in appearance. The toy is formed of any of a number of materials including rubber, plastic, or wood including wood composites and is solid. It is either rigid or flexible. A flavoring (scent) is added, if desired. The toy is adapted to float by including a material therein that is lighter than water or it is adapted to glow in the dark, as desired, by the addition of a fluorescent material that is either included in the material from which the toy is made or the flourescent [sic] material is applied thereto as a coating. The toy may be segmented (i.e., notched) so as to break off into smaller segments, as is useful for smaller animals or, alternatively, to extend the life of the toy. Various textured surfaces including camouflage colorings are anticipated as are straight or curved main sections. The toy may be formed of any desired material, as described, so as to be edible by the animal.

We really like the part where inventor Ross Eugene Long III allows that the "apparatus" might be made from wood. But really, the genius of the patent lies in describing the field of the invention:

The present invention, in general relates to animal toys and, more particularly, to devices that a dog can chew and carry in its mouth.

Dog chew toys are well known and include a wide variety of devices, some of which rapidly disintegrate--as is well known to most dog owners.

Other dog chew toys are sometimes used in fetching training exercises or simply for play but they may be difficult for the dog to pick up off of the ground. If tossed onto a body of water, they may sink. Furthermore, while a dog may see the toy at night or in dim light, the owner is unable to do so and therefore the toy cannot be used in dim light.

Other variations, such as it being edible or chewable (to relieve the natural tendency dogs have to chew) are also desirable features to incorporate in any dog chew toy design.

It is a natural tendency for dogs to chew and they often make inappropriate selections as to what they will chew. A scented or flavored animal toy that encourages a dog to chew, and possibly to consume it, would be useful.

When training dogs, especially hunting dogs, to fetch or when deciding which dog is especially good for the scent discrimination purpose, it is necessary to asses their ability to detect objects based solely on scent. Therefore an animal toy that is camouflaged would be useful in training and determining a dog's ability to locate hard to find objects based solely on scent.

Accordingly there exists today a need for an animal toy that floats, is easy to pick up off of the ground, can be seen in dim light, is made from a variety of possible materials, and which dogs may chew.

Clearly, such an apparatus would be a useful and desirable device.

Unfortunately for our hero, he failed to make his first patent maintenance fee payment and as a result, the patent fell into the public domain on 26 March 2010. Now, anyone can produce a stick and profit from it!

We did say we're not making any of this up, right?