Today, we're showing off our newfound ability to extract median income data for a particular sub-population given just what we know for the full population and another sample sub-population within it!

That sounds pretty boring, right? What do you say we liven it up a bit by noting that the full population for our example today represents all women with money income of one kind or another in the U.S. for the years of 1947 through 2010, while the sample sub-population within that group represents the women who earned wage or salary income over that period of time? 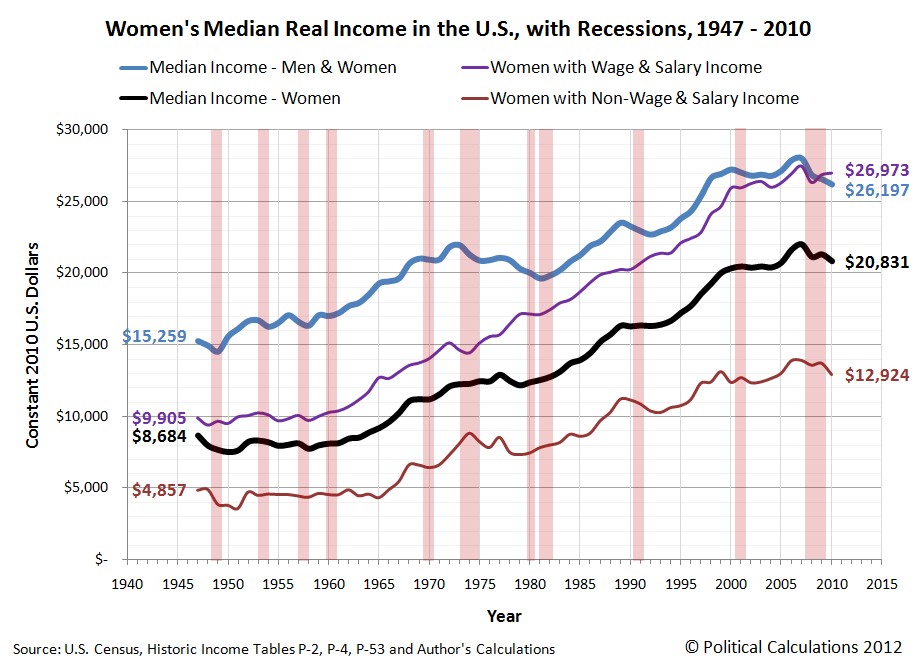 Looking at the data for women with wage and salary income, we find that initially, the median income for women was largely flat for the years from 1947 through 1960, hovering around the $9,900 to $10,000 mark in the inflation-adjusted terms of 2010 U.S. dollars.

After 1960 though, we see a steady rise - one that seems to be largely resistant to recessions. As of 2010, the median income for women with wage and salary income has risen by a factor of nearly 2.7 to $26,973, for a real annualized growth rate of 1.9% per year.

Update 23 April 2013: What you're about to read next has turned out to be off target - instead of pacing changes in Medicaid and Medicare, the median income of the non-wage or salary earning women has instead turned out to be largely pacing changes in Social Security benefits paid to women over time, which have often coincided with changes in Medicaid and Medicare. See here for more information....

Looking at the new data we've extracted for the median incomes of women with non-wage or salary income, what we find is really the story of Medicaid and Medicare over time.

Here, we see that after initially dipping in the years from 1948 through 1951 and recovering in 1952, the median incomes for women with non-wage or salary income was essentially flat at a level around $4,500 from then through 1965. Beginning in 1966 however, we find that the median incomes of these non-wage or salary earning women began to rise, reaching $12,924 in 2010, which works out to be a real annualized growth rate of 2.4% since 1965. As it happens, the timing and magnitude of that rise coincides with the launch of both Medicaid and Medicare in the late 1960s.

In fact, we can see much of the growth in the median incomes of non-wage or salary earning women paces the U.S. government's average spending per Medicare beneficiary for each year from 1966 through 2010: 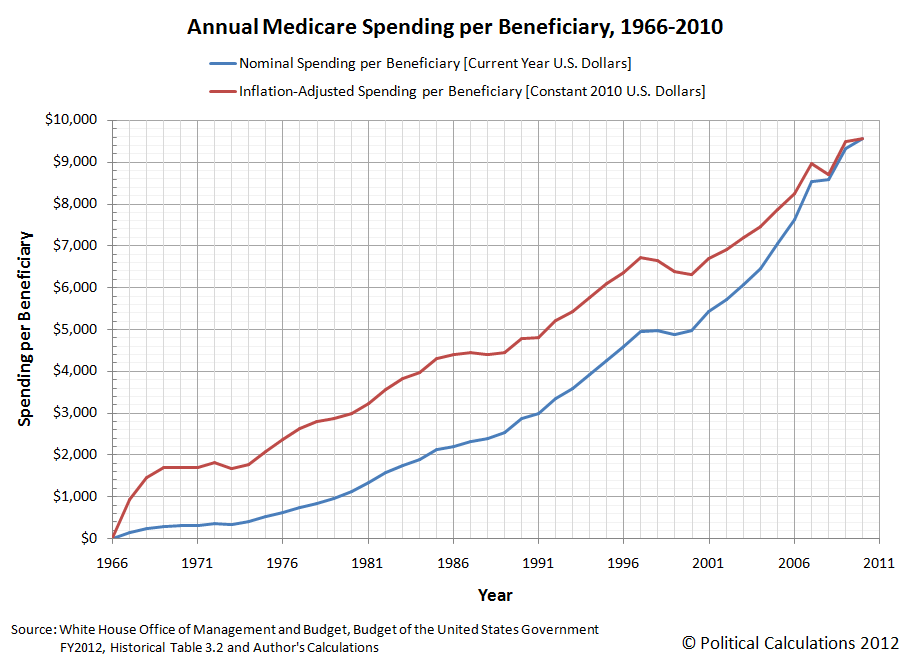 And so, we see that government assistance in the form of Medicaid and Medicare is largely responsible for much of the observed growth of the median income of non-wage or salary earning women over the last 45 years.

The published data for women's wage and salary income has a pretty unique anomaly for the years 1974, 1975 and 1976. It appears that the U.S. Census' data jocks were off by 10,000,000 in their estimates of the number of working women in each of those years, or about 25% of the actual figures, which in turn, led the Census to over-estimate the median income for women in those years by a similar percentage.