Where do you rank in the U.S. income spectrum?

Now that the U.S. Census has released its total money income data it collected as part of its 2012 Annual Social and Economic Supplement survey, we can tell you almost exactly where you rank among American individuals, men (if you're a man), women (if you're a woman). Or, once you consider the combined income for your family or the members of your household, we can determine your percentile rank among each of those kinds of groupings!

It all starts below! Just enter your personal income, your family's income, which includes the incomes of your spouse and any dependents you might have, regardless of whether they live with you or not, and also the combined income of just the people who live within the same four walls of the household that you do and we'll tell you where you rank (if you're accessing this article through a site that republishes our RSS feed, click here to access the tool on our site.) And if you live outside the United States, be sure to convert your income into U.S. dollars first!

The default data we've presented in the tool above represents the average total money income of U.S. individuals, families and households in 2011.

In the tool above, your percentile ranking indicates the percentage of Americans who either share your income or earn less than you do. As such, it tells you what percentage of the population you're above in the income earning food chain.

In considering your percentile ranking, here's how many income-earning people, families and households there were in 2011:

And here are our charts showing the cumulative distribution for U.S. families (left) and households (right). Click the images for larger versions: 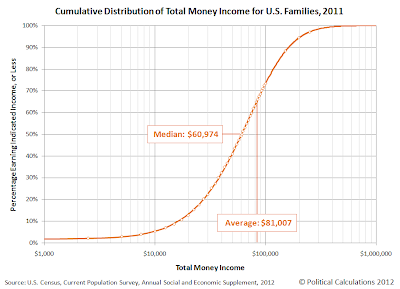 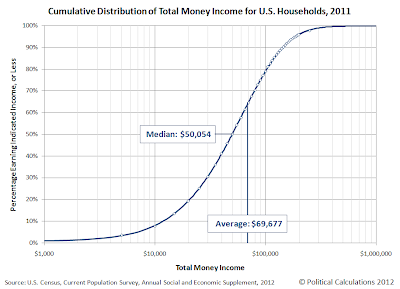 The U.S. Census will report the data it collects for income earned in 2012 sometime in September 2013.