Now that the U.S. Bureau of Economic Statistics has published its third and final, for now, estimate of GDP for the second quarter of 2012, we can use our "modified limo" forecasting technique to project approximately where GDP will be recorded for the third quarter of 2012!

Our chart below shows how our inertia-based forecasting method has done since 2004: 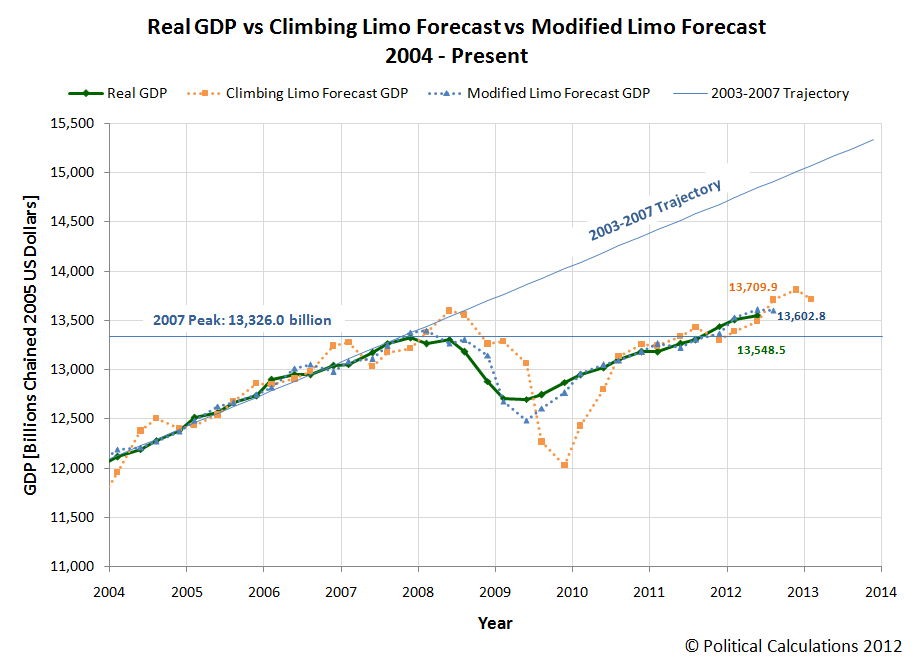 To narrow in on where 2012-Q3's GDP will actually be recorded, we estimate the following odds:

Although we're coming off a quarter where the U.S. economy could reasonably be described as being in a "microrecession", as we had long expected, we anticipate that the GDP growth rate will be stronger in the third quarter of 2012 by comparison. Going by the dividend futures data we've had available since November 2011, the third quarter of 2012 has always looked as if it would be the strongest in 2012. Much like how the second quarter of 2008 was the strongest quarter in that year, even though the U.S. economy had already peaked and had begun falling into recession earlier in December 2007.

That head of steam coming out of 2012-Q3 will dissipate however and a reversal in economic momentum will increasingly become evident now that we're in the fourth quarter of 2012. Our outlook for 2013 does not look good.

As a final note, because our "modified limo" forecasting method is an inertia-based model, it is least accurate when the economy goes through a severe turn, either toward recession or toward recovery. Although it will eventually self-correct as the economic situation stabilizes, any large deviation from our forecasts still communicates a wealth of information about the changing health of the U.S. economy and may be used to confirm the onset of a new recession or recovery, long before the NBER gets around to making any official pronouncements.