Yesterday, we observed that investors have shifted their forward-looking focus in setting today's stock prices backward from the first quarter of 2013 to the fourth quarter of 2012 instead. Today, we'll explore one of the big reasons why: the looming dividend cliff. The WSJ's Jason Zweig explains (emphasis ours):

Enough about the "fiscal cliff." What about the dividend cliff?

At one second after midnight on Jan. 1, 2013, the maximum tax rate on dividends is likely to go from 15% to either 18.8% or 43.4%. The best-case scenario: Congress retains the top dividend-income tax rate of 15%, and the only increase is the scheduled 3.8% surtax on investment income for high earners. The worst case: Congress decides dividends are to be taxed at ordinary-income rates, and the highest rate jumps to 39.6%, plus the same 3.8% surtax.

That looming tax hike for dividends represents a huge incentive for shareholders to push the companies whose stock they own to increase the amount of cash dividends they pay out this year, and perhaps even to pull ahead dividends currently planned to be paid in 2013 by the end of 2012 instead. Zweig continues:

Analysts say many companies are waiting to see what Congress does before they finalize their payment plans. There are no significant tax or financial consequences for companies that speed up a dividend, analysts say.

There is some precedent for doing shareholders a favor by paying out income before it becomes taxable at a higher rate. Two years ago, when Congress also looked likely to jack up taxes on dividends, roughly two dozen companies, including Sara Lee, accelerated their January 2011 payouts into December 2010.

That time, the dividend-tax rate stayed put after a congressional reprieve. This time, a rise to at least 18.8% from 15% is all but inevitable; the odds of a tripling to 43.4% are uncertain.

"I am advising all my wealthy clients [who own private corporations] to pay their dividends this year" before rates rise, says Robert Spielman, a tax accountant at Marcum LLP in Melville, N.Y. "So why shouldn't public companies who care about their shareholders' well-being do the same thing?"

This difference has the potential to create a massive incentive problem for the nation's stock markets, with repercussions that can impact the entire U.S. economy. And it will all hinge upon how great the difference is between the tax rate for dividends and the tax rate for capital gains. The greater the difference between the two, the greater the incentive will be for investors to buy into stocks that do not pay dividends to shareholders, because investing in these kinds of stocks will increase the after-tax returns on their investments compared to what they might otherwise earn if they had invested in dividend-paying stocks instead.

Over time, the ongoing incremental and increasing effect of millions of investors favoring the tax-advantaged stocks of non-dividend paying companies will create real problems in the stock market, with the potential to create real havoc with the U.S. economy ensured.

That's not speculation on our part. That's *exactly* what happened the last time the tax rate for dividends was significantly greater than the tax rate for capital gains in the United States.

The outcome of that tax policy produced what has become known as the "Dot-Com Bubble", the inflation phase of which began within days, if not hours, of when the U.S. government unexpectedly acted to lower the tax rate on capital gains at the end of April 1997. 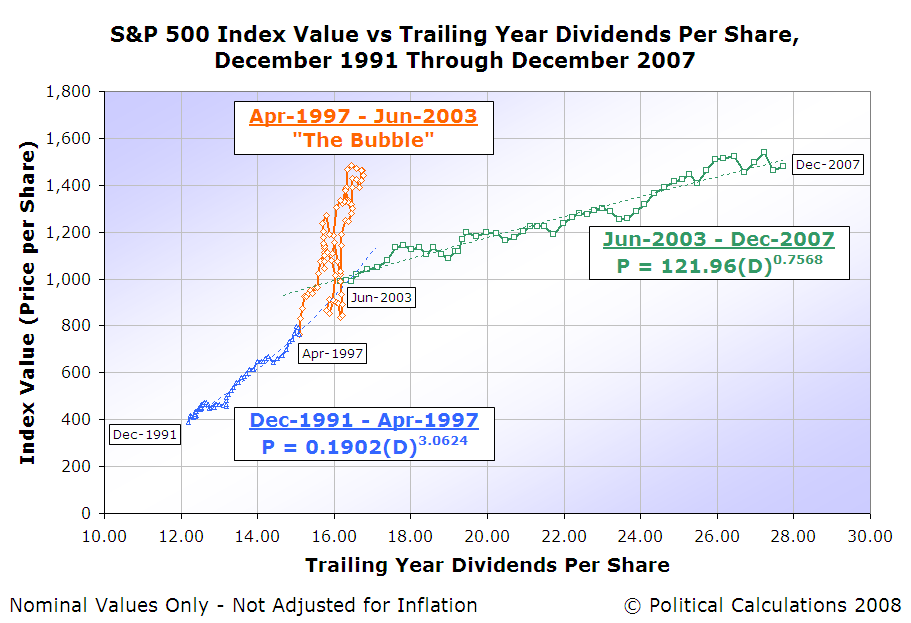 In the next several years, non-dividend paying stocks, mainly represented by technology and Internet-related companies, benefited as their shares of stock provided outsize returns to investors compared to dividend-paying stocks. Consequently, their share prices came to be sharply inflated well above what any sound valuation method would place them.

Then, like the vaporware that many of these companies promised to produce, the inflating bubble that generated such exorbitant stock price valuations could not be sustained, and the bubble popped in August 2000. The U.S. economy fell into recession shortly afterward.

The deflation phase of the Dot-Com Bubble lasted for nearly another three years, ending only when the U.S. government acted to equalize the tax rates applying to dividends and capital gains late in May 2003 and returning order to the stock market.

During the deflation phase of the Dot-Com Bubble, millions of investors who had been counting on their investment gains were sorely disappointed, which especially hurt those whose retirement funds were invested in the stock market.

Jason Zweig notes the concerns of at least one fund manager for today's situation,:

Daniel Peris, co-manager of the Federated Strategic Value Dividend mutual fund, is concerned that higher tax rates might provide some companies with an excuse to avoid raising dividends. "It's yet another pretext not to send out a check to company owners," he says.

That lesson is backed by history. Since at least 1980, whenever capital gains have been taxed at a lower rate than dividends, the number of dividend-paying companies decreases. 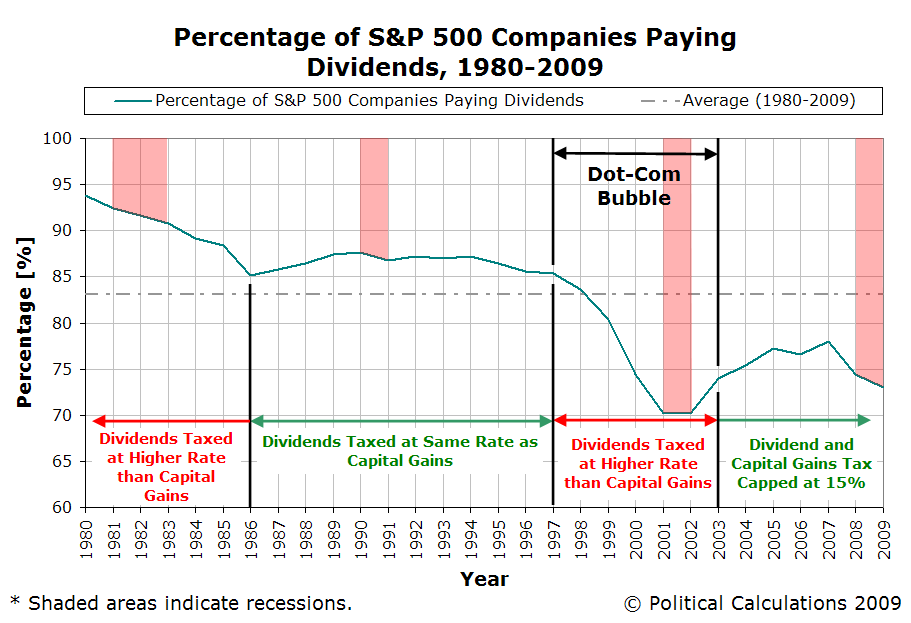 This result hurts those investors who prefer the regular payments provided by earning cash dividends, such as retirees, who have their investment options limited as companies either limit the growth of their dividend payments or reduce them in response to the incentives created by the government's tax policy.

Today, that matters because high quality companies that consistently pay dividends provide a much higher return on investment and incomes for retirees than many alternatives, such as the yields that might be earned on U.S. Treasuries or interest from bank certificates of deposit, both of which currently pay near-zero rates of return. It's almost like the strategy of some political leaders today is to disadvantage today's sound investments so that those lousy alternatives start seeming attractive by comparison.

History is pretty clear on this matter. And given recent history, the last thing the U.S. economy needs is another government-generated boom-bust cycle sparked by poorly considered investment tax policy.

Correction 5 November 2012: Changed "March 1997" to "April 1997", which marks the last month of the period of relative order in the stock market before the bubble began.