Looking at the just published trade data between the U.S. and China, it would appear that both the U.S. and China have fallen into recession. Both nations are now showing near-zero annualized growth rates for the value of goods and services traded between them in August 2012: 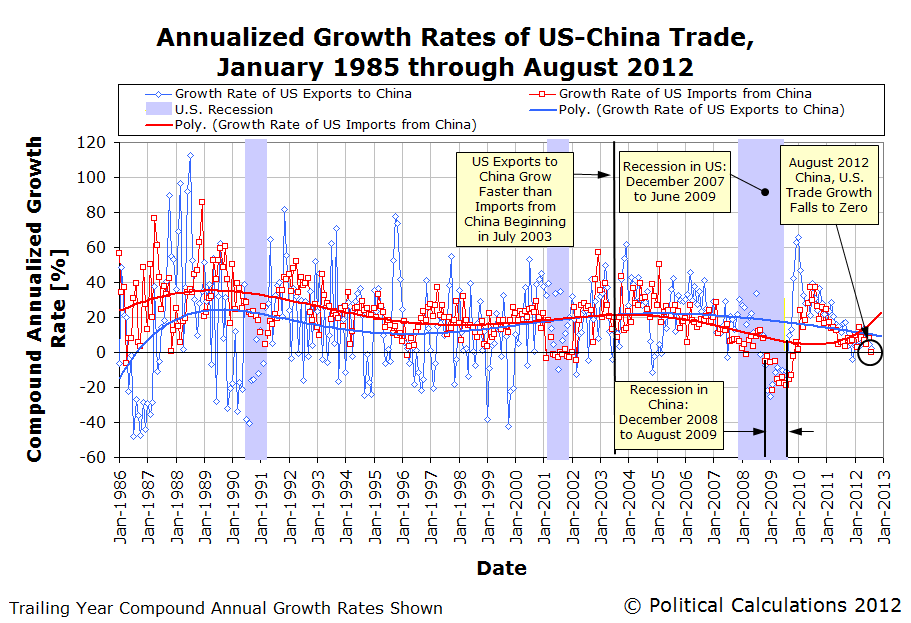 That's a change from what we observed back in August, when it appears that China's economy had rebounded somewhat from a slow spring, based on the data then that only covered the period through June 2012.

Since then, the annualized growth rate of U.S. exports to China has fallen back to the low single digits that are consistent with that nation's economy being in recession. Going by international trade data, China entered into recession back in December 2011.

Meanwhile, the year-over-year growth rate of U.S. imports from China has turned negative for the first time since November 2009, when the U.S. was still coming out of recession.

So far, that's consistent with our earlier observation that the U.S. economy was in a microrecession in the second quarter of 2012, as the trade data collected and reported by the U.S. Census tends to lag the actual state of the economy by a number of months. The growth rate of the U.S. imports from China had last been negative in the period from November 2008 through November 2009, although officially, the previous recession in the U.S. ran from December 2007 through June 2009, with fairly mild recessionary conditions prevailing through the first half of 2008.