Will Starbucks (NYSE: SBUX) kill its own business with its Verismo single serving home brewer?

Think about it. Why would you go to Starbucks if you could get almost exactly the same product at home? Consider the following excerpt from the online Starbucks Store: 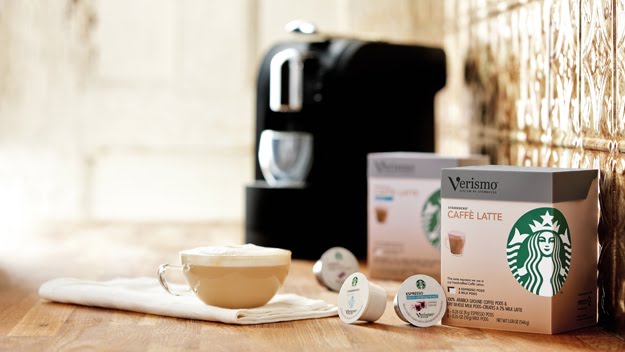 Your favorite Starbucks® beverages. All at home, all from one machine.

The machine that makes both espresso and brewed coffee. Now you can use the Starbucks recipes that we use in our coffeehouses to create the drinks you love - Caffè Latte, espresso, and a freshly brewed cup of Starbucks® coffee - at home. Our sweet creamy Caffè Latte, the original loved in our coffeehouses. Our caramelly rich true espresso, perfectly unchanged since our first handcrafted latte.

Let's say it is that good. Did Starbucks just slit its own throat?

To find out, we're going to compare the basic cost of brewing up one of Starbucks' Caffè Lattes at home compared to ordering one out while shopping, to see which makes more sense to the customer. Here are the costs we're considering:

By contrast, a Caffè Latte at our local Starbucks would cost us about $4.00.

So the question boils down to this: should we pay $199 to make our own Caffè Lattes at home for $1.62 each, or should we keep going to Starbucks to get them for $4.00 each?

To answer that question, we've adapted our Rent vs Buy tool to apply to this specific situation. Here, we've entered the costs we discussed above, and have also included other factors that might influence their value, such as the inflation rate for the Verismo pods or for Caffè Lattes purchased at your local Starbucks. We'll also consider the cost of money, which we're measuring as a typical interest rate that might apply for a low-rate credit card.

Doing this math then, we find that it makes much more sense from a money standpoint to stop buying Caffè Lattes at our local Starbucks than it does to equip our home with a Verismo brewer, which would make it a desirable investment.

So to answer our original question, yes, the Verismo brewer has the capability of negatively impacting traffic at Starbucks store locations.

Keeping all the numbers the same except for the number of lattes consumed per year, we find that 10 Caffè Lattes per year would seem to be the division line between it making sense to buy a Verismo brewer versus buying your lattes at Starbucks. Assuming, of course, that the produced Caffè Latte you make at home is equivalent in quality to the store-purchased cup and that the brewers are available in the places where you want to consume your Caffè Lattes.

If not, that premium of $2.38 per latte is the extra price you'll pay for convenience.

In any case, our tool above will work for just about any of the single-server coffee brewers that have become popular in recent years - just plug in the numbers that apply for the situation you're considering, and we'll let you know if it ever comes close to making sense!

Having now run the numbers, we think that the introduction of the Verismo brewer is an interesting step for Starbucks, since it would clearly offer its strongest customers a more economically viable way of consuming Starbucks' products. All without the overhead of operating so many physical locations and the associated cost of maintaining staff at them and very likely generating a higher profit margin.

That would also free up a lot of prime commercial real estate if its customers reduce their store purchases, which we suspect might become an important source of revenue for the company as it adapts its business model.