How has President Obama's view of the desirable level of federal government spending evolved since he came into office?

This is the flip side to our previous analysis of the government revenue forecasting ability of U.S. Presidents, in which we found that a President risks losing credibility for their economic initiatives when government revenues fail to match the forecasts they make in their annual budget proposals.

Fortunately for President Obama, his credibility isn't at risk of falling even lower with this aspect of the federal government budget. Instead, we will evaluate his judgment.

Unlike the situation with collecting revenue, where factors outside the U.S. government's control affect how much revenue it can actually collect, the federal government is fully capable of spending every single dollar it intends to spend. As a result, a President's budget proposal really represents their view of the appropriate level of spending needed to satisfy their political priorities.

Our chart below reveals how Presidential desires for federal spending have stacked up against reality for each the budget proposals made by both President Bush or President Obama for each of the U.S. government's fiscal year from 2004 through 2014 (FY2004 to FY2014). 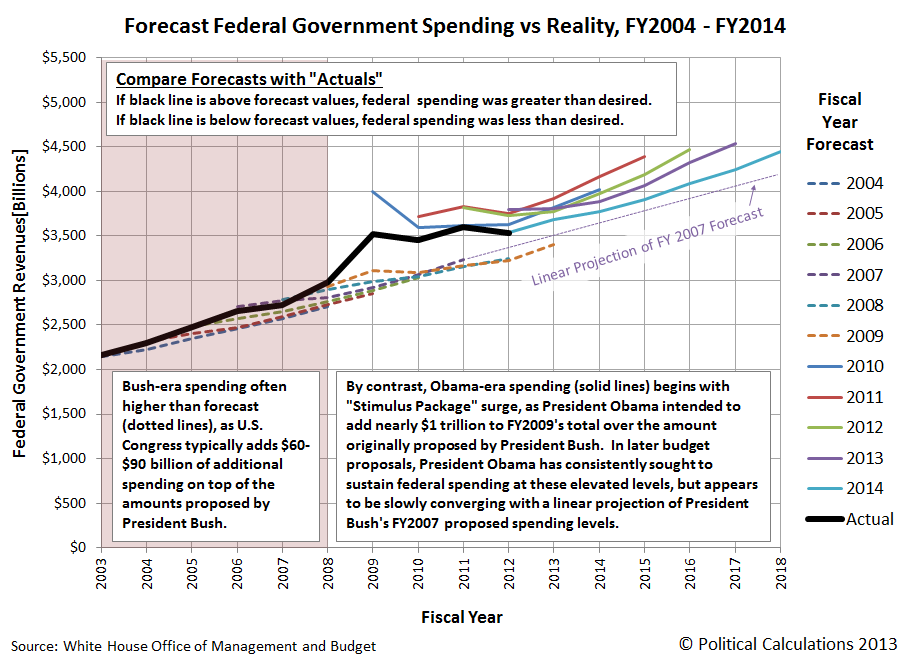 Looking over President Bush's record, we find that the federal government's actual level of spending was often anywhere from $60 billion to $90 billion greater than the amount originally proposed by the President. This is largely the result of the U.S. Congress adding spending on top of the amounts proposed by the President. Generally speaking, this outcome suggests that President Bush's political priorities were largely agreed to by the U.S. Congress during his tenure in office.

By contrast, President Obama's spending proposals have always been considerably out of whack with respect to the general consensus within the United States for the appropriate level of federal government spending, which we can observe in the vertical separation between President Obama's desired level of spending and the actual amount of spending that has occurred during his time in office. Politically, we can observe just how out of whack President Obama's desires for spending have been in the near universal margins by which his budget proposals have been rejected in the U.S. Congress.

That however appears to have changed somewhat with his most recent budget proposal for Fiscal Year 2014, the first following his re-election, where President Obama would appear to have finally begun to rein in his ambition for higher spending to fund his political initiatives, as the amount of federal spending would appear to be anywhere from $100 to $200 billion more per year than what the U.S. government would have spent under an extended projection of President Bush's FY2007 budget proposal.

While the President's FY2014 budget proposal is anywhere from $100 billion to $300 billion less than what President Obama has previously proposed for the U.S. government to spend in any of his first-term budgets, it still runs a minimum of $475 billion above the President's historically non-credible forecasts for the federal government's revenue collections.

That's progress in evolving toward a more financially-sound budget, whose priorities are more in tune with those of the American people, but there is still a lot of room left for President Obama to continue his evolution in that direction.