Political Calculations
Unexpectedly Intriguing!
03 May 2013
The Future of Beer in Aluminum 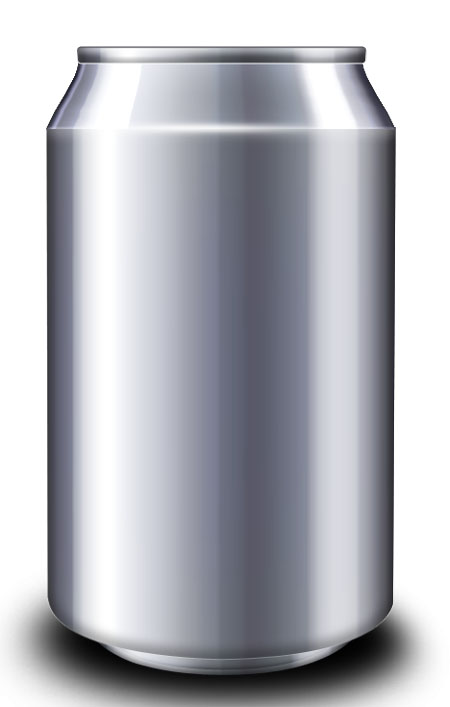 We know it's hard to believe, but canned beer has an image problem. We thought we'd take this opportunity to shed some light on it.

Or perhaps not, because in reality, that's where the real problem begins.

You see, when beer is exposed to ultraviolet light, it will undergo a chemical reaction that produces the dreaded, skunky-flavored 3-methyl crotyl mercaptan molecule, which is all it takes to turn beer bad.

That's why good beer is typically not sold in clear-walled containers - brewers who care about their customer's beer consumption experience will do everything they can to keep their product from any exposure to sources of UV radiation, such as that produced by fluorescent lights or that is found in natural sunlight.

To get around that problem, brewers often use brown-colored glass for their bottled product, which blocks UV light from being able to penetrate to the beer inside. Other colors of glass bottles can work, but less well. Brewers who use these others types of colored glass bottles tend to do so for marketing or branding purposes - to visually distinguish their products on store shelves. But then their products' reputation tends to suffer (just ask any connoisseur of imported green-bottled Eurobeers. The same might be able to be said of the drinkers of Mexico's Corona lager, who have adapted by adding limes to their bottles to compensate for the unaltered taste!...)

Aluminum cans are excellent containers that also avoid this problem, but until very recently, they were only cost-effective to produce for the largest brewers. The brewers for whom mass-market sales represent the majority of their business, whose products are therefore broadly targeted.

And unfortunately as a consequence of targeting mass market appeal, whose products are therefore bland tasting.

That disconnect accounts for much of the image problem that canned beer has.

But now, things are changing because the economics of canning beer has changed. It has finally become much less expensive for smaller brewers to can their product, which is making it possible for more flavorful beers to be produced and brought to market using this technology.

And since craft brewers make their reputation, and their sales, by producing more flavorful beers, they're pushing canning technology as far as they can to make it better. The Core77 industrial design blog recently featured the following works in technological progress as examples of the innovations that might soon redefine the canned beer drinking experience. First up, what the brewers of Sam Adams are doing to amplify the flavor of beer that is consumed straight from the can:

Recently there's been word that a major brewer is introducing a yet another new can this summer. How much more design variance is possible in an aluminum beer can?

Samuel Adams' parent company, Boston Beer Co., hired IDEO to find out. The Sam Adams brand has famously eschewed cans for years; company founder Jim Koch, displaying a Steve-Jobs-like asceticism, felt that cans offered an inferior customer experience and refused to deal in them. But beer sold in cans is some 57% of the U.S. market, and are the only way beer can be served in certain places, like airplanes and stadiums. That translates to millions of dollars' worth. So two years ago, Koch decided he'd consider cans and contracted IDEO to design a better type.

What Sam Adams is looking to introduce this summer is a basic can that has been subtly redesigned to increase the amount of air flow over the beer inside to bring out more of its aroma while being consumed, which turns out to play a big role in how beer tastes. Here, the new can design features a wider top with a reshaped lip (shown on the right below, shown next to a standard can design on the left) - which is somewhat similar to the lip of the pint glass design that Sam Adams introduced several years ago. 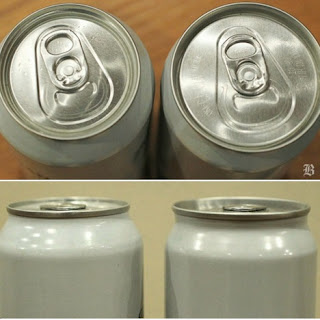 Brewer Sly Fox has a similar idea - redesigning the pop-top of their can to expand over the entire top of the can: 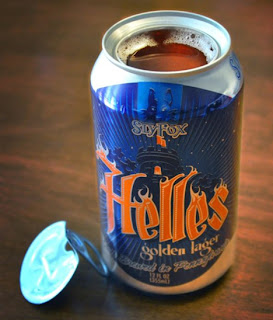 Those are quite different from the kind of can innovations being developed by the mass-market brewers. The Belgian-Brazilian conglomerate that bought Anheuser-Busch is focusing on making a bow-tie shaped can to match the bow-tie shaped logo of their flagship product, which we suppose might also make it easier for their target demographic to hold: 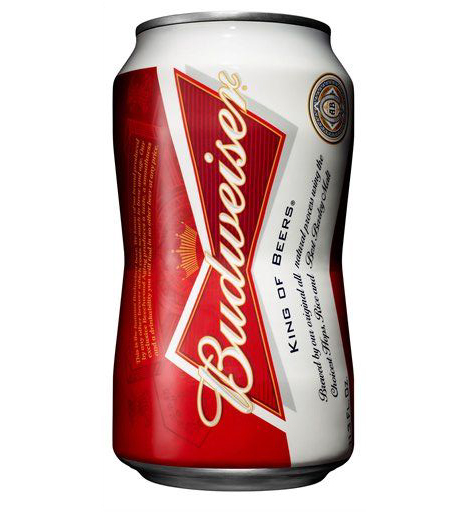 Meanwhile, MillerCoors is focusing on making it easier for their consumers to consume their product faster: 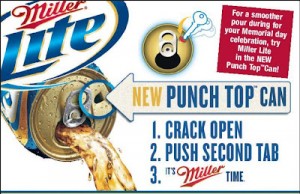 We'll note that this design minimizes the amount of time that their consumers would have to deal with the aroma of the products they choose to package in these containers, which probably says quite a lot about the quality of those particular products.

There are some very different strategies at work here - it will be interesting to see if the intended consumer segments to whom these products will be targeted will respond the way the brewers hope.

Image Credits: Corrupted Development, Impulse Sports, and of course, Core77 (follow the various links in the post above!)

Economist/brewer Phil Miller has a whole section of his blog dedicated to the intersection of beer and economics!