So much for a boring summer for the stock market - we might actually have to go into the office. In the mean time, let's get straight to the "selling signal" charts we know you want to see after yesterday's stock market carnage. 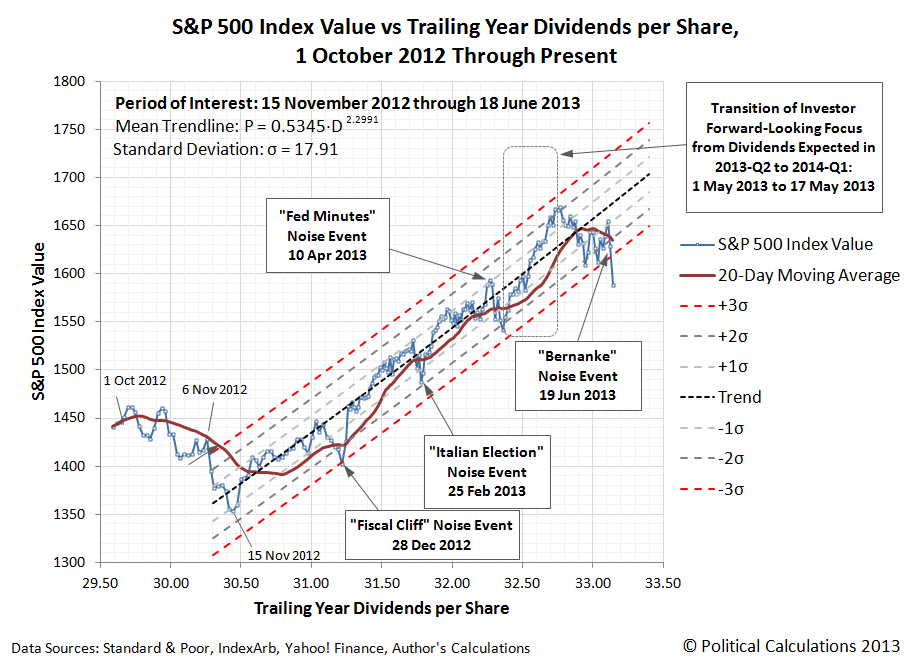 This chart shows the most recent combination of microtrends that have existed since 15 November 2012 for stock prices with respect to their underlying trailing year dividends per share, which we're treating as if they were all a single trend by exploiting the fractal nature of stock prices. The one thing that should leap straight out at you is that the daily stock price for 20 June 2013 has fallen well below the "normal" range where we would expect stock prices to be if they were behaving, well, normally. And normally, we would take that as a signal to sell.

But as we've shown previously, this may not be as clear a sell signal as we might hope. It might, after all, just be an outlier for the overall trend in stock prices, and stock prices might quickly go back to be within their "normal" range. And if that's the case, we would find ourselves in the situation where we sold far too soon, where if we chose to re-invest, we would have to buy back into the market at a higher price than where we exited it, effectively losing money in not being able to buy the same number of shares we once owned and of course, the transaction costs.

To avoid that potentially costly situation, we'll concern ourselves more with the trajectory of the 20-day moving average for stock prices, which we'll use as our true signal to sell. Here, if we see the 20-day moving average of the S&P 500's daily closing values drop below the normal range where we would expect stock prices to be if the trend were intact, that will be our more conservative signal to sell.

By doing this, we're trading a little bit of additional short term loss for the potential upside that stock prices might turn quickly around and resume following their previous trend. The important thing to remember though is that we might still be saving ourselves quite a bit of loss to the downside if we waited for a sell signal using the macrotrend (the microtrend in our first chart covers the area inside the purple rectangle on the macrotrend chart). 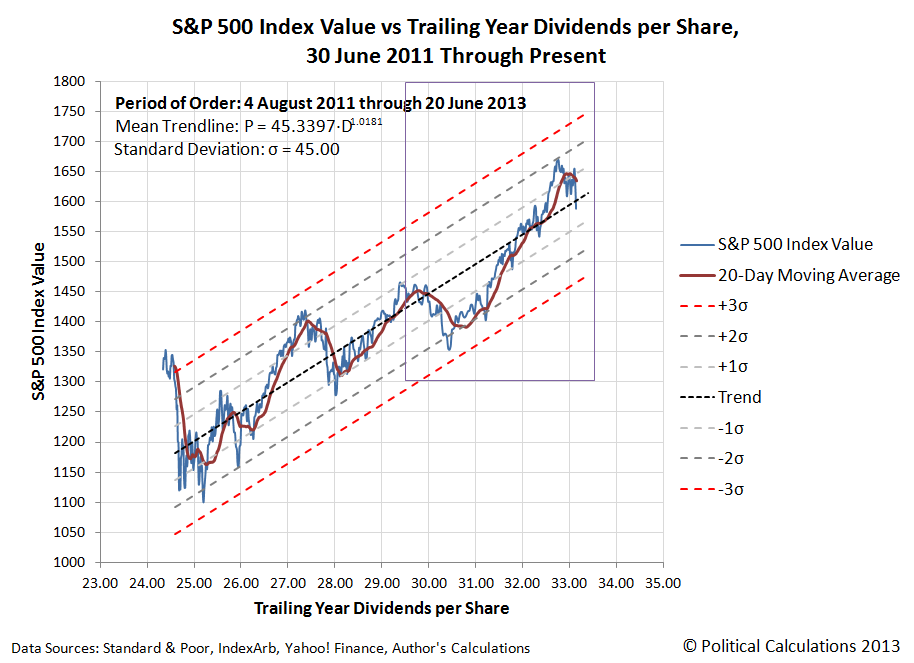 The key thing to remember about this method is that it works under limited circumstances, and applies only when we've had both generally rising stock prices and more importantly, generally rising dividends per share. Its primary purpose is to help minimize losses after an established trend has clearly broken down.

For what it's worth, we don't expect that we'll see the 20-day moving average for the S&P 500 move outside the "normal" range where we should expect it to be until the middle of next week at the earliest. So certain doom isn't imminent, it's just lurking around the corner.

A couple of days ago, we wrote up an analysis of why stock prices are behaving as they are and will, which we'll be sharing here on Monday, 24 June 2013 as events catch up to it. As least there's that to look forward to next week!...