Today, we're going to demonstrate how the demands of the International Monetary Fund (IMF), the European Commission (EC) and the European Central Bank (ECB) combined together into a troika to wreck the economy of Greece in 2010. 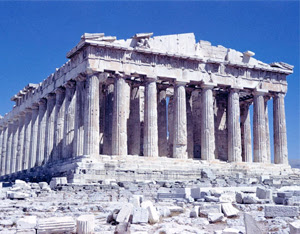 Specifically, we're going to show how the austerity measures they demanded and obtained as a condition of their bailout of the Greek government directly sent Greece's economy into a tailspin.

Let's set the stage. Here is the Guardian's timeline of the major events leading up to the bailout in mid-2010 as they were known at that time. It's definitely worth reviewing to get a sense of the crisis that led to such incredibly poor decisions.

Let's focus now on those austerity measures demanded by the Troika as a requirement to bail out the Greek government from its fiscal crisis. In July 2010, Greece's government reported what that would entail in terms of permanent spending cuts and permanent revenue increases.

We say "seeming" because a number of measures mentioned in the report were not enacted, while other amounts were reported as full-year values, where in reality, they were applied for just a fraction of the year. After subtracting the values for the non-enacted measures from the total and adjusting for the actual partial-year data, we find that the Greek government actually increased its intended tax collections in 2010 by €5.971 billion [$7.932 billion USD].

We're going to use those numbers in our tool below, along with the GDP value recorded by the World Bank for Greece in 2009, and also our standard GDP multipliers for government spending cuts and tax increases to see just how close we can get to what actually happened with Greece's GDP in 2010 (we'll also zero out the quantitative easing option, since that's not a consideration in this case). All values are presented in terms of U.S. dollars:

The collapse of Greece's GDP was such that the nation was unable to meaningfully close its budget gap, which ensured that the nation's fiscal troubles would be a prolonged experience. 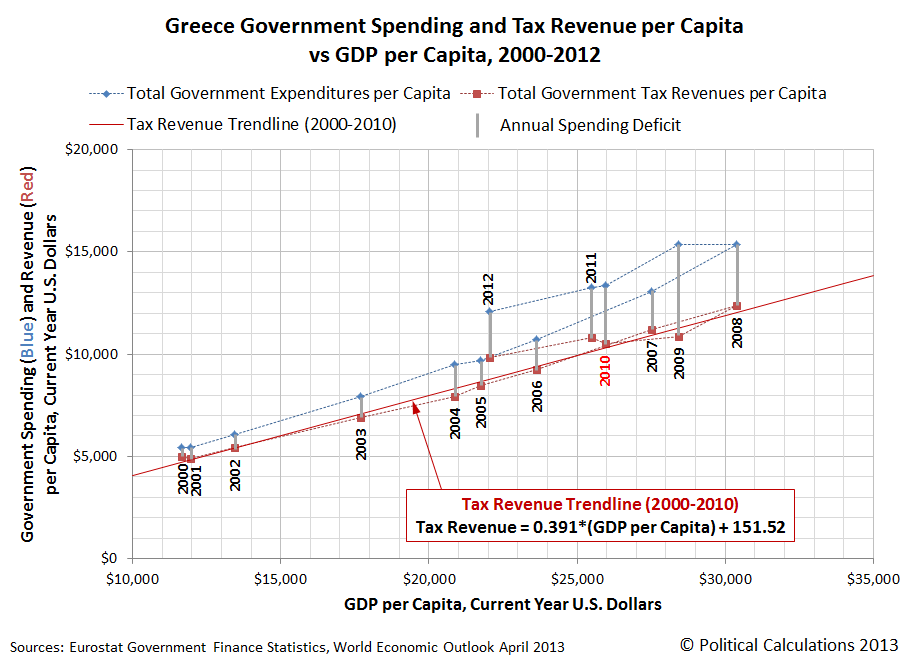 What this chart tells us is that the Greek government only collected about as much revenue in 2010 as it would have without any tax hikes given the size of its GDP for the year. What our math earlier in this post demonstrates is that its GDP would have been much higher if not for its tax increases. (Go ahead! Try it in our tool above!)

On a side note, see if you can tell from our chart above when the next time was that the Greek government implemented additional tax hikes....

Barry Eichengreen describes what might have been for Greece:

The critical policy mistakes were those committed at the outset of the crisis. It was already clear in the first half of 2010, when Greece lost access to financial markets, that the public debt was unsustainable. The country’s sovereign debt should have been restructured without delay.

Had Greece quickly written down its debt burden by two-thirds, it would have been able to shed its crushing debt overhang. It could have used a portion of the interest savings to recapitalize the banks. It could have cut taxes, rather than raising them. It could have jump-started investment and gotten its economy moving again, if not in a matter of months, then, with luck, in no more than a year.

In its official post-mortem on the crisis, the International Monetary Fund now agrees that debt restructuring should have been undertaken earlier. But this was not its view at the time. Under the leadership of Dominique Strauss-Kahn, the Fund was in thrall to the French and German governments, which adamantly opposed debt relief.

Without the benefit of any beneficial monetary policy to offset the disastrous effects of the "balanced approach" demanded by the Troika for its fiscal policies, the wrecking of Greece's economy was ensured.

There are many lessons to be learned here. So far, it only appears that the IMF alone among all the leaders of the world's nations has learned any of them. But then, they still don't appear to have learned the most important lesson that taxes should not be hiked during a recession.

Would it be too much to ask for a fresh slate of more competent leadership all around the world?