If you're the parent of a toddler, you know that life can get pretty messy. Especially when your toddler is attempting to drink something that isn't already in a sippy cup.

The problem is that creates somewhat of a hassle for today's busy parent, because that means you to go to the time and trouble of transferring some sort of drinkable liquid from its container into your toddler's sippy cup whenever it's empty and they're still thirsty. And if you're filling the cup with a different kind of beverage from what you previously filled it up with, that means that you'll have to fully rinse out both the cup and lid before you can even fill it with the new beverage.

That's a lot of extra steps just for getting fluids into a thirsty toddler!

That's the problem that inventor Ellyn Audrey Yacktman solved with her patented invention, the Sippy Cup Lid for a Beverage Can, as documented in U.S. Patent 8,286,827. 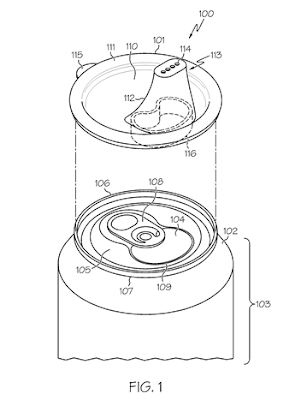 Yacktman's invention can convert a typical aluminum beverage can into a spillproof container. Fitting the tops of today's typical cans, Yacktman's lid would make it very easy to change out a toddler's beverage for a fresh one, with perhaps a quick rinse of just the lid when changing beverage types. Life for the busy parent gets both easier and simpler!

We can only imagine how New York City Mayor Michael Bloomberg would react if he saw lots of toddlers in Central Park drinking straight from soda cans topped with the sippy cup lids. Or better yet, one of those big energy drink cans!...

We'd leave it there, but we can't help but notice that this particular invention also overlaps the innovations in canning technology taking place in the beer industry that we've recently featured.

We think that connecting the sippy cup lid to a can of beer has some potential beyond just the toddler market. We're thinking it would also be a good novelty item aimed at the college market, where we suspect that it will always find some sales. And then, it would also make a good gift item for that beer-drinking friend of yours who somehow always manages to spill some of it all over themselves and the things around them.

At the very least, once the sippy cup lid for cans hits the market, we think that Popular Mechanics might want to add the inventions to their list of 8 easy-drinking gadgets for the beer enthusiast!