That was almost exactly one month later than it should have. Let's revisit one of our now rare public predictions for stock prices, from back on 10 June 2013:

Overall, it was a really boring week, but at least it set up a fun, seeming paradox for our favorite chart. Given the nature of how the moving average of the change in the growth rate for stock prices works, we'll soon see the 20-day moving average for the S&P 500 top out then fall back toward the green line (where it really wants to be), even as the value of the S&P 500 itself rises.

In the relative absence of noise in the market, that would create the potential for the S&P 500 to reach 1700 before the end of June 2013.

But then, noise is always present in the market. It's its volume that's what's random and unpredictable!

A little something we like to call The Bernanke Noise Event intervened in that forecast for the future, throwing the market off track for a whole month, the recovery from which was then drug out a little longer by a poorly considered trial balloon put out by the White House proposing Larry Summers as the leading candidate to be nominated to run the Fed after Ben Bernanke's current term expires in January 2014.

But that new noise began to dissipate when the White House gauged the market's negative reaction and began to float the name of an alternative candidate on Wednesday, 31 July 2013, as the Fed also continued its efforts to repair the damage done by Bernanke back on 19 June 2013. By the next day, enough of the noise of Summers had decreased to allow the S&P 500 to finally close above the 1700 mark.

The chart below shows where we're at today. Mind the comments in our chart above and note the differences from previous versions (hey, if the Fed's Open Market Committee can get by on tweaking the otherwise same statement from meeting to meeting, so should we be able to get away with doing the same thing on our S&P 500 stock prices and dividends per share acceleration chart!) 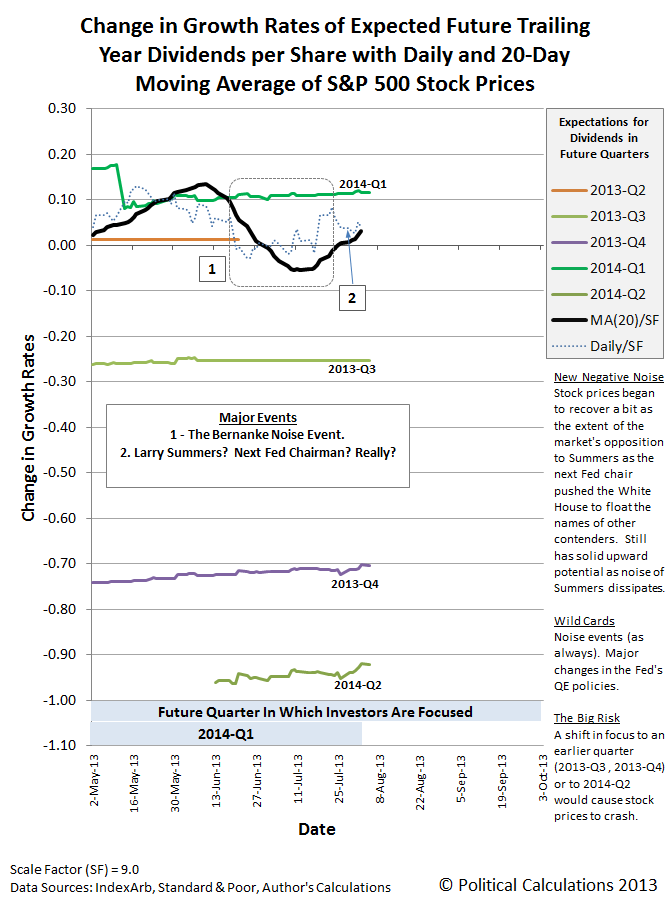 Unless it becomes relevant as events develop, this is probably the last time that we'll feature the following chain of analysis in considering the major market drivers this summer.