Political Calculations
Unexpectedly Intriguing!
12 August 2013
The Fed's Minions Shoot Themselves in the Foot

Do you remember the Bernanke Noise Event from earlier this summer?

In a nutshell, unexpected comments from outgoing Fed Chairman Ben Bernanke at 2:42 PM EDT on 19 June 2013 caused stock prices to fall, as he indicated that the Fed could begin tapering off its purchases of both Mortgage Backed Securities and U.S. Treasuries, which it has been doing as part of its current quantitative easing programs. Because those quantitative easing programs have been the only thing keeping the U.S. economy out of a full-fledged recession since September 2012, investors reacted negatively to the news, sending stock prices sharply lower.

The Federal Reserve then spent the next month attempting to repair the damage. And they succeeded.

Sure, the White House mucked things up a bit in suggesting that Larry Summers was President Obama's leading choice to be the next Fed Chairman, but that was a relatively minor noise event, and stock prices soon recovered to new highs.

And then, last Wednesday, 6 August 2013, at 10:32 AM EDT, stock prices began to fall once again in response to a new noise event. Since we've long established that it takes stock prices just two to four minutes to respond to the reactions of human traders when unexpected news hits, that would put the event window for the release of the news driving stock prices at that time somewhere between 10:28 AM and 10:30 AM EDT.

And as it happens, there was only one noise event that occurred during that limited period of time that had the potential to prompt such a negative reaction for traders: a story from Reuters noting that the ratio of unemployed individuals to job openings had declined to a four year low. 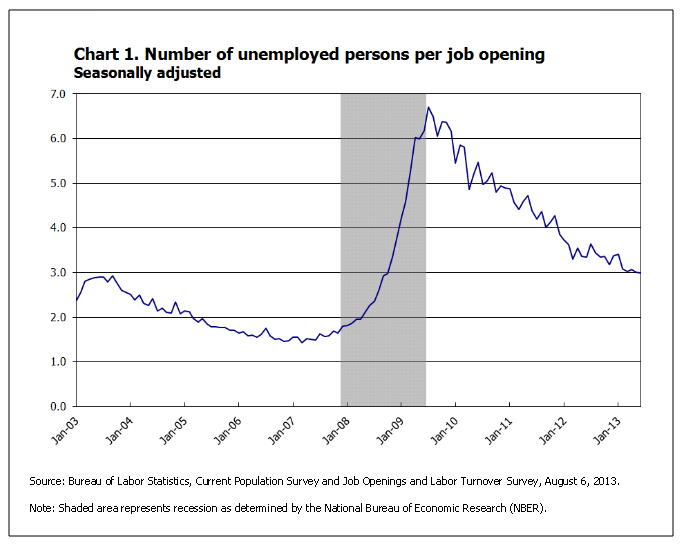 That's exactly the kind of news to which investors would react negatively, because the Fed has been saying for some time that improvements in the U.S.' employment situation like this would set the timing for when they would begin tapering off their QE efforts. And having seen the effects of the Fed's terminations of its previous QE programs, there's good reason for investors to have a negative perception, especially if there are any indications that doing so would be premature. Again.

So when 10:35 AM EDT rolled around and the WSJ's blog posted the news of Atlanta Fed President Dennis Lockhart's interview from the previous day that suggested that the Fed would begin tapering off its QE efforts this September hit the wires, the news simply confirmed what investors had already speculated when they got the jobs news just minutes earlier. Consequently, Lockhart's comments didn't affect stock prices. At least on that day, although we suspect that the market would have responded very differently if he had indicated that there would be no tapering of the Fed's QE programs until next year.

Later in the day, Chicago Fed President, Charles Evans, added his two cents as he indicated that the Fed could begin ending its QE programs in September 2013, but left the door open as to when the actual timing might be. Bloomberg reported those comments at 1:07 PM EDT, however since his comments were fairly generic, they didn't directly move the markets on 6 August 2013.

That's not to say that their comments had no effect. They are most certainly factoring into the expectations of investors in defining the atmosphere of the market.

On Thursday, 7 August 2013, Dallas Fed President Richard Fisher also indicated that the Fed will likely begin trimming its purchases of Treasuries and Mortgage-Backed Securities in September 2013, adding to the generally negative atmosphere in the stock market, which we're now seeing play out in the form of an increasing deviation in stock prices away from the levels they should be.

You can see that in our chart below, as the change in the growth rate of daily stock prices is deviating away from the level they would be if investors were focusing on the first quarter of 2014, which they had been. Instead, their forward-looking focus is being directed to the third quarter of 2013, which is when all the Fed's minions' talk of tapering is set to begin taking place. 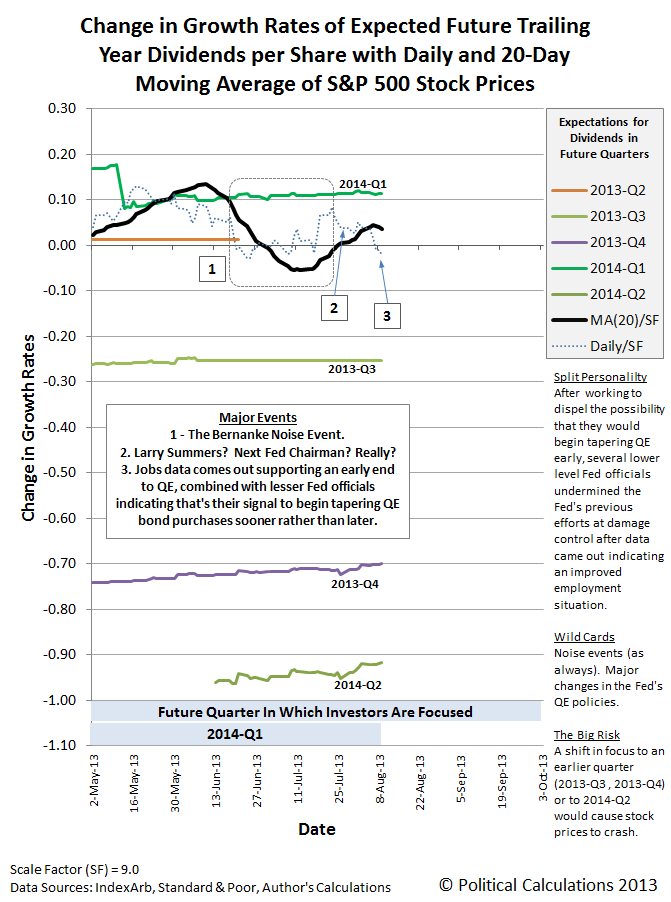 And it's not just the stock market that is responding negatively to the prospect. Bond investors are also behaving similarly:

The lack of clarity over the Fed's plans gave investors reason to pull a record $3.27 billion out of U.S.-based funds that hold Treasuries in the latest week ended Aug. 7, data from Thomson Reuters' Lipper service showed on Thursday.

"People are looking ahead to the September FOMC meeting and the prospect that the Fed begins its long-awaited exit strategy," said Michael Sheldon, chief market strategist at RDM Financial, in Westport, Connecticut.

In a sense, the comments of the three Fed branch Presidents are working to undo all of the Federal Reserve's damage repair from earlier in the summer, and perhaps the only reason stock prices haven't fallen further as yet is because Fed Chairman Bernanke and a number of the Fed's other heavy hitters haven't yet publicly indicated that the Fed will pursue cutting back its QE programs earlier rather than later.

Don't you hate it when your minions shoot themselves (and your previous policy) in the foot?

Until the Fed's decision of when it will begin cutting back its QE programs is clearly evident, we would expect that investors will split their focus in setting stock prices between the expectations that correspond with the 2013-Q3 and 2014-Q1. Stock prices in our chart will likely fall in between the expected change in the growth rates of trailing year dividends per share for these quarters, rather than closely tracking one or the other as they might normally behave.

The stock market is certainly a lot noisier place than it should be.

Unless it becomes relevant as events develop, this is probably the last time that we'll feature the following chain of analysis in considering the major market drivers this summer. We know we said that last week, but let us know when the links below stop being immediately relevant to the current situation in the market....