What exactly was happening one year ago and just six months ago in the stock market?

We're asking that question today is because of the two charts we featured yesterday that we're showing side-by-side below, which look very similar to one another except for the very recent trajectory of stock prices:

So why is there such a difference between the apparent trajectory of the change in the year-over-year growth rate of stock prices?

The answer has to do with the base reference point from which those growth rates are calculated. In the chart on the left, that base reference point was one year ago, which in the chart, coincides with the decline in stock prices that occurred as the stock market initially reacted to Barack Obama's re-election, just before the tax avoidance-inspired stock market rally that defined the Great Dividend Raid of 2012.

When calculating the year-over-year growth rate in stock prices, because the growth rate is very sensitive to both the starting and ending points of the period in question, the decline in stock prices a year ago combined with their current trend is showing up in the form of an elevated growth rate. We see that in the relatively elevated level that daily stock prices have taken, which are now above the level that the expectations associated with the level of dividends for 2014-Q1 would place them.

Meanwhile, six months ago, the stock market suddenly spiked upward on 14 May 2013, as stock prices were racing to catch up to the then recent shift in the forward-looking focus of investors, who were shifting away from focusing on the dividends they were expecting to earn in 2013-Q2 to instead focus on the more distant future of 2014-Q1.

With stock prices then suddenly elevated, that reduces the annualized growth rate between then and now, which shows up in the sudden decline in the change in the growth rate for stock prices in our chart on the right!

To help better understand the dynamics of what was going on six months ago, it might help to look at the trajectory that stock prices as represented by the value of the S&P 500 have taken with respect to our dividend future-based mathematical model of stock prices: 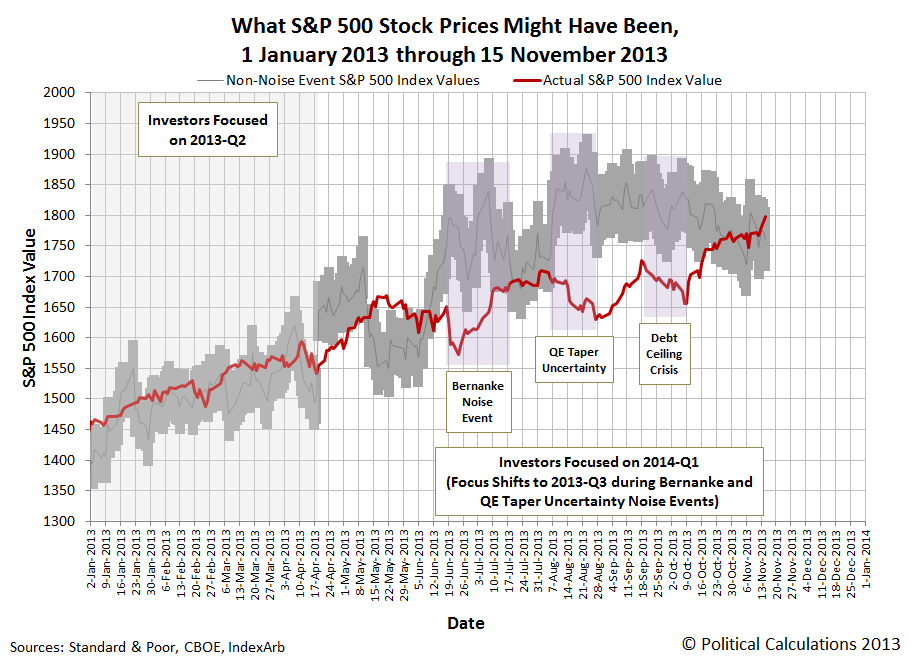 In the chart above, we observe that investors shifted their forward-looking focus away from 2013-Q2 toward 2014-Q1 in mid-April 2013.

Investors were slow to react to that fundamental shift in future expectations for dividends, and the sudden spike upward on 14 May 2013 was really a short-lived noise event as stock prices overshot the level that would be supported by 2014-Q1's expected dividends.

Consequently, the focus transition rally stalled out and stock prices drifted lower to converge with the newly adjusted future expectations for dividends in 2014-Q1. They finally moved below the level that our dividend futures model would set them, and were beginning to rally once again in mid-June 2013, which was interrupted by the market's reaction to Federal Reserve Chairman Ben Bernanke's comments on 19 June 2013, after which the trajectory of stock prices is more characterized by noise than fundamentals, at least up until the end of the debt ceiling crisis in mid-October 2013.

Getting back to the subject at hand, that dynamic from six-months ago makes this period a poor base reference from which to measure the growth rate of stock prices. To minimize the echo effect of past noise or fundamental shifts in focus in our math, we really want to choose a base reference period that is removed from these kinds of disruptive events, where stock prices were changing at a steady pace.

Looking at our third chart showing the trajectory of stock prices with respect to that suggested by our mathematical model, the obvious candidate that best fits these requirements is the period from approximately 17 January 2013 through 19 February 2013. Using this period as our base reference would allow us to work around the term of the Great Dividend Raid rally, which ended on 20 December 2012.

And that's where we'll pick things up next....