Nothing exciting happened from our perspective for the S&P 500 during the week ending 8 November 2013, as stock prices behaved almost exactly as we suggested they would a week ago, as our chart illustrates: 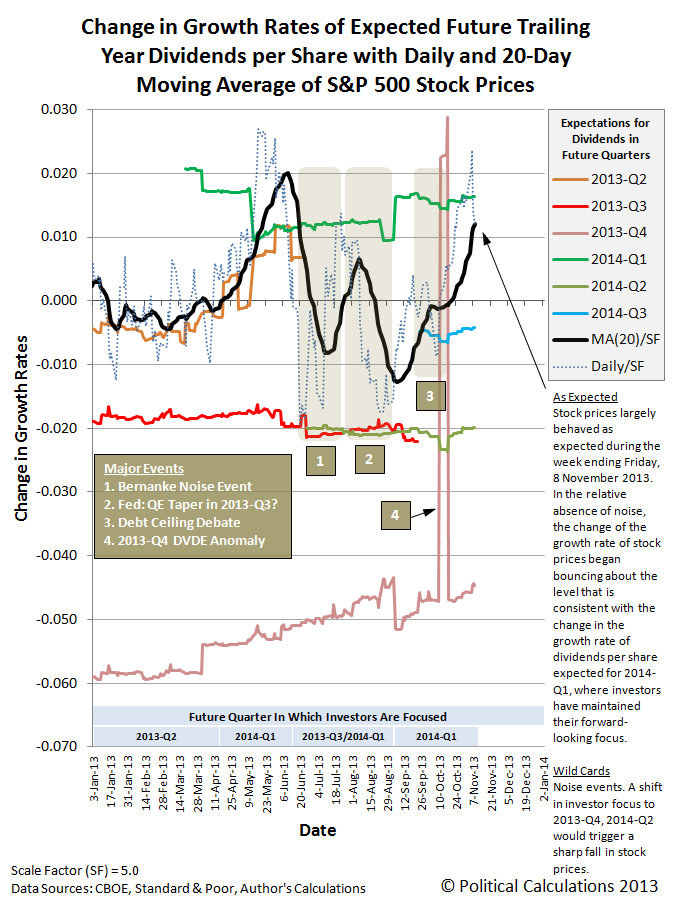 To save readers from excessive squinting, here are the notes that appear in the margin of the chart:

As Expected: Stock prices largely behaved as expected during the week ending Friday, 8 November 2013. In the relative absence of noise, the change of the growth rate of stock prices began bouncing about the level that is consistent with the change in the growth rate of dividends per share expected for 2014-Q1, where investors have maintained their forward-looking focus.

Overall, it was a boring week. But that might be about to change in the near future, for reasons we'll explore in the analyst notes for this week.

We're coming up on the one-year anniversary of the beginning of the Great Dividend Raid portion of the 2012-2013 Fiscal Cliff rally, which launched a major fundamental-driven upward movement in stock prices back on 15 November 2012 that lasted through 18 December 2012 (the second phase of the Fiscal Cliff rally began in January 2013). That's important today because we use the year-over-year growth rate of stock prices in our calculations.

Because stock prices sharply deviated from their previous trajectory as a direct response to that event, we expect that we'll see an echo of the event in the form of an apparent major deviation in our calculated change in the year-over-year growth rates. Since stock prices then rose then in response to that event, unless a similar noise event erupts today to maintain the relative year-over-year margin in stock prices, that echo would show up in our chart above like a large negative noise event.

Similarly, if stock prices had crashed a year ago, then subsequently recovered, we might see the echo of that crash show up in the form of a positive noise event for stock prices.

This might all be well and good, since the echo effect would eventually end and allow to get back to business as usual, just like in a real noise event, but that could create a problem in our doing this kind of analysis while it is ongoing because the deviation in the change in growth of stock prices would not actually be the result of present-day noise. It would instead seem like noise, without actually being noise.

This is something that we've always thought might be a possibility given our analytical methods, and this will provide an opportunity to test out the echo-filtering techniques we've been thinking about developing for some time.

Normally, we would interpret that kind of dramatic swing as a change where investors have refocused their forward-looking attention and expectations in setting today's stock prices, but we wonder if the echo effect with the unfiltered data would make that seem to be the case, even though investors would really be focused on a different quarter in the future. The echo would then appear as a shift in forward-looking expectations, and although it would be a phony shift, it would mean that our methods of projecting stock prices can still work even under that condition!

We're excited - we're going to find out how this works really soon!