Because it has suddenly become relevant, thanks to Pope Francis' first Evangelii Gaudium, we thought we might revisit the trends in income inequality in the United States.

In the chart below, we've presented the Gini ratios (or coefficients) for U.S. households, families and individuals that have been calculated using the U.S. Census Bureau's collected data on the incomes earned by Americans for each year from 1947 through the most recent data available. 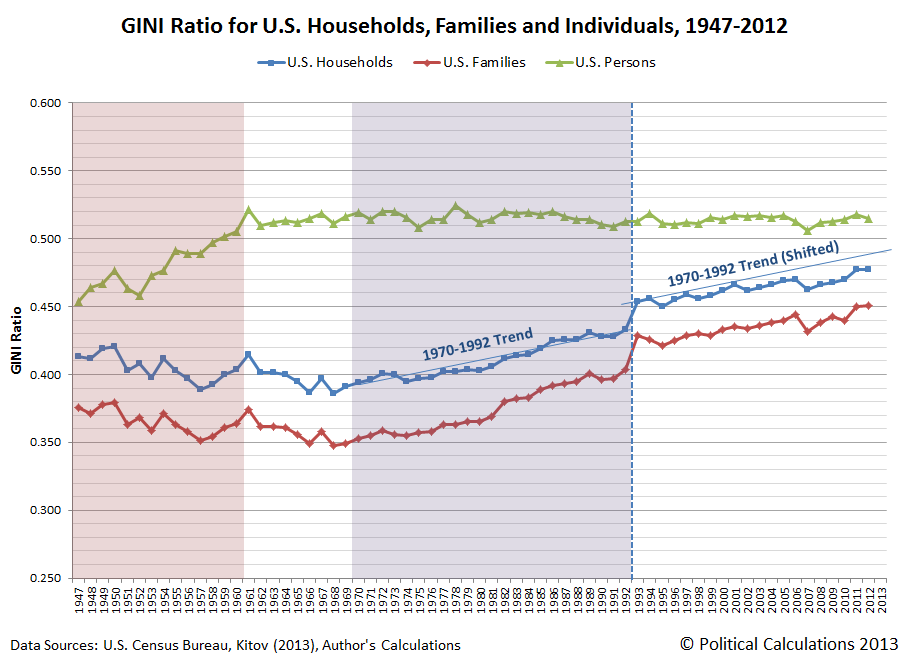 The Gini coefficient is the most commonly used measure of the amount of income inequality in a society.

In the chart above, we see that the amount of income inequality among individual Americans increased in the years from 1947 to 1960. This corresponds to the period of time following the end of World War 2's wage and price controls on 9 November 1946, which had prevented Americans from being able to earn incomes that matched the value of their true level of productivity. The U.S. federal government had imposed the controls early in the war in attempting to minimize its cost, however the major consequence of imposing such equality-enforcing measures was to create major shortages that deprived the majority of Americans of access to adequate supplies of many basic goods and necessities throughout the war years at the same time that it prevented the most productive Americans from reaching their full income-earning potential.

After 1960 however, the post-war income adjustments reached their natural limits and the level of income inequality among U.S. individuals stabilized. The Gini coefficient for U.S. individuals has been essentially flat ever since, falling within a very narrow range.

That observation is significant because if income inequality in the United States was really rising as a result of economic factors that concentrate an increasing amount of income into progressively fewer hands, we would not observe this outcome because income payments are made to individuals, not to households and not to families. That basic reality means that a rising level of economically-driven income inequality would be most prominently evident among the distribution of income for individuals as measured by the Gini coefficient if it were actually taking place - just like it did in the post-World War 2 recovery years from 1947 through 1960.

We do however observe such a rising trend in measured income inequality in the Gini coefficients calculated for U.S. households and for U.S. families. Interestingly, we don't see much of that change occurring when economic factors were actually driving up the level of income inequality among individual American income earners in the years from 1947 through 1960. Instead, we see that the overall trend for household and family inequality was basically flat during this time, which then continued through the 1960s. It's not until 1970 that we find that a rising trend in the amount of income inequality for U.S. households and families begin to take hold.

From 1970 through 1992, we see that the amount of income inequality among U.S. households and families increases steadily - and since we don't observe a similar trend among individuals, we must conclude that social factors, such as the changing composition of the nation's families and households over time, are the primary cause of that trend.

After 1992, we see what appears to be a sharp increase in the Gini coefficient. This turns out to be the result of a major change in the U.S. Census Bureau's data collection methodology, as they increased the maximum amount of income that a household or family could report up to $1 million from $300,000. This change resulted a one-time upward shift in the calculated values for the U.S. Gini coefficient for households and families for the years following 1992.

What's more significant though is that the rising trend for income inequality among U.S. households and families shifted to grow more slowly over time after 1992. Once again, without any meaningful change in the Gini coefficient calculated for U.S. individuals to indicate the potential influence of economic factors, something else had to change in U.S. society to produce that shift.

And what that something else was is something we'll explore in the very near future....

Notes About the Data

Given the very strong correlation between year-over-year percentage changes observed in household and family Gini coefficients from 1968 through 1976, we applied the annual percentage changes given by the Gini data for U.S. families to estimate the household values for the period pre-dating 1967, when the Census began to officially collect this data.

The U.S. Census Bureau does not include income from capital gains in its data for total money income, which accounts for the difference that exists between the estimates of Gini coefficients between this data and that reported by the Congressional Budget Office (CBO), which incorporates capital gains data collected by the Internal Revenue Service (IRS) on income tax returns. Since this data only covers "tax units", which doesn't distinguish between households, families or unique individuals living on their own or within households or families, much less their changing composition over time, economists who blindly rely upon CBO or IRS data are incapable of providing an accurate assessment of the actual structure of income inequality in the U.S., which invalidates much of their analysis and policy prescriptions.

Income from capital gains is really deferred income, which accumulates over time and is realized only when assets, such as real estate or the shares of a business owned by an individual, are sold. For many such asset owners, the realization of capital gains represents a rare or irregular event, which is why this source of income is not included in the Census Bureau's total money income statistics.

In reality, the income accumulated through capital gains is often directly proportionate to the income that the asset owners realize in the form of wages, salaries, dividends or rents throughout the term of their asset ownership, which is captured by the Census' income survey, and which is why we may rely solely upon that data to determine what trends exist in income inequality over time. While the Census' income data may not capture the full magnitude of such trends, which might be periodically exaggerated due to things like stock market or real estate bubbles, its data will most certainly capture whether a trend exists and give a very good indication of its comparative strength.

Update 28 May 2015: To better see what we're describing, thanks to a sharp-eyed commenter at Reddit who gets it, see Figure 5 in this CBO report, which shows the effect of adding the "missing" capital gains data to the Census Bureau's Total Money Income data for U.S. households. The practical effect of including detailed capital gains income from U.S. income tax returns for high income earning households is to simply increase the calculated Gini coefficient for households by 0.01-0.02 in each given year, while not meaningfully affecting the either the direction or the magnitude of the overall trends from one year to the next. The people who are getting hung up on this point are basically arguing that each of the data points in our Gini chart above should really be drawn 0.01-0.02 of a point higher than they have been, which if you think about it, isn't going tell you anything different.

The bottom line is that the Census Bureau's total money income data is the only valid source of data that allows us to determine the impact that individual income earners have within their families and households. It is the only data that can possibly allow anyone to determine whether economic or social changes are behind the trends occurring in the development of income inequality over time. Using other sources of data that do not allow the impact of individuals to be measured or isolated without acknowledging its limited utility in making any legitimate determination on the state of income inequality within a population is the equivalent of analytical malpractice.

The Census Bureau's total money income data also excludes non-cash transfers of income, which includes benefits that large numbers of low-income earning individuals, families or households might enjoy such as housing assistance, which means that the Census Bureau's reported Gini coefficients understate the effective incomes of Americans who qualify for such government welfare programs. Since it also excludes capital gains as we've already discussed, which are predominantly earned by those at the upper end of the U.S. income spectrum, using the Census' total money income statistics to determine the level of income inequality in the United States works out to be somewhat of a wash in terms of the effect on the Census' calculated Gini coefficients. These values should be therefore considered to be estimates that are in the right ballpark.

Update 28 May 2015: The same sharp-eyed commenter at Reddit also requested a citation regarding our observation that the capital gains incomes of the rich are offset by things like housing assistance for the poor - we would point you to that same CBO report, but this time, see Figure 11, where the effect of government transfer payments, such as housing assistance, supplemental nutrition assistance, Social Security pensions, Medicaid, Medicare, etc. for low income earners are taken into account. The effect is to lower the Gini coefficient by 0.06-0.08 for each year, so it not only washes out the effect of those capital gains, they significantly lower the effective income inequality in the U.S. by a good sized margin. And that's before including the taxes paid by those with the highest incomes, which reduces it further.

Kitov, Ivan O. and Kitov, Oleg I. The Dynamics of Personal Income Distribution and Inequality in the United States. [PDF Document]. Fifth Meeting of the Society for the Study of Economic Inequality (ECINEQ). July 2013.

U.S. Congressional Budget Office. Trends in the Distribution of Household Income Between 1979 and 2007. [PDF Document]. October 2011.

The bad news for President Obama's claims, as well as those of his supporters, is that our post today is really Part 1 of a three part series that pretty much fully undermines their arguments. Unless they've found a way to get Obamacare to work well enough to resuscitate the dead, their proposed solutions will only impose greater hardships on the living....

Speaking of which, here are the links to Part 2 and Part 3, which will connect through once the posts are live.